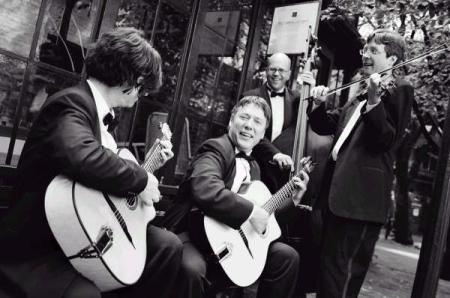 Van Django is an exciting and entertaining quartet inspired by the music of Django Reinhardt and Stephane Grappelli's 1930's gypsy jazz group Quintet of the Hot Club Of France. Four Vancouver musicians make up the group Van Django – Cameron Wilson on violin, Budge Schachte on guitar, Finn Manniche on guitar/cello and Laurence Mollerup on double bass. You can expect a thoroughly entertaining evening at a Van Django concert, like a walk back in time as you experience the music that energized an era.

The members of Van Django are accomplished arrangers and composers, drawing on a galaxy of musical styles while remaining true to the classic sound of the Hot Club of France. Song titles such as Smoke On The Caravan, which draws from the Duke Ellington classic Caravan along with Deep Purple's rock classic Smoke On The Water, and I Found A New Baby In The Hall Of The Mountain King - where swing jazz meets the classics - will give you an idea of what to expect!

They have just released their debut CD, "Tiptoe Trip", and this concert marks the official CD launch in town. It's a wonderful collection of original tunes, covers of Django Reinhardt classics, and twisted arrangements of the works of Mozart and beyond. The concert also marks Beethoven's birthday, so expect a few of his tunes to be Van Djangoed. Now there's a verb to conjure with!