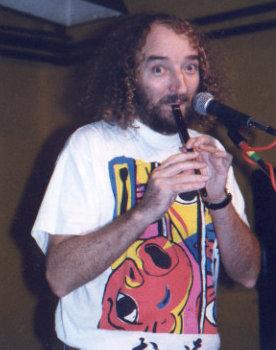 Vin Garbutt hails from Teesside in Northern England. He sings passionately. His songs are passionate forays into the injustices and tragedies of life, yet his concerts are renowned for the humour of his stories and on-stage antics. A veritable wizard of the tin whistle, Vin is also a fine guitarist, and has released a string of excellent albums in a career that has spanned almost four decades. Last year we almost lost him to a serious illness. Thankfully, he has made a complete recovery, and has even incorporated tales of his hospitalization into his stage show! The man is truly remarkable. Voted "Best Live Folk Act" in the BBC Radio 2 Folk Awards in 2001, Vin has played at the Rogue many times since his debut here in 1987. Bring a few friends. A Vin Garbutt show is an experience made for sharing.

Opening for Vin will be the brilliant BC fiddler Shona Le Mottee and guitarist / songwriter / raconteur and all-around Vancouver folk Renaissance Man Tim Readman, who has often shared the stage with Vin - on both sides of "The Pond".