The Wheat in the Barley
CD Launch 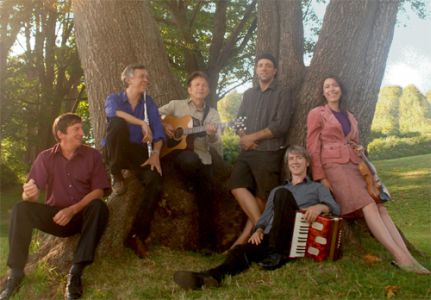 The Wheat in the Barley have been delighting audiences with their unique and creative arrangements of classic traditional tunes for quite some time now. As folk veteran Gary Cristall put it, they've been "messing with tradition for over a decade," with a focus on various streams in Canada's multicultural legacy. Funk, blues, klezmer, jazzy improvs and good ol' rock rhythms infuse their blazing trad repertoire with a myriad of musical flavours from around the world.

Their new fourth CD, Can't Draw the Curtain, marks a turning point - founder Steve Gidora has been writing original songs that blossom amid the group's instrumental arsenal like grape vines around an arbor. He has invited old friend Medderick Crotteau to join them again as a guest vocalist on the CD, and he will open the night with the Wheaties backing him up on the new tunes as well as a few of his own. (Medderick wrote and sang the title cut from the Wheaties 1998 CD, Grandad.) Fiddler Nicole Scoffield has again shown her superb vocal skills on a Blue Rodeo classic, Five Days in May.

But this instrumental powerhouse is going as strong as ever. Multi-instrumentalist Victor Smith has created another testament to the high cool of accordion, Crawdad Fiasco, that also features the hitherto unknown Cajun saxophone. On Ellen O'Grady, their irresistible rhythm section driving some skankin' harmonica leads makes you want to get out of your seat and boogie to an Irish slip jig. And Mark Dowding's jazzy soprano wails again in the Gypsy jazz favourite Bei Mir Bist Du Schein. This West Coast folk band has truly come of age as a Canadian roots-inspired tour de force.

The new CD will available for the first time anywhere at this show, which will be recorded by CBC Canada Live.