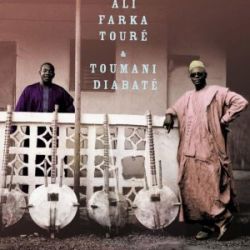 A few years back these two titans of the Malian scene, acquainted since the younger Diabate's childhood, recorded together to produce 'In The Heart Of The Moon'. Released in 2004, it's an album of exquisite pieces from the various traditions of Mali, and was widely hailed as a masterpiece, netting the duo a Grammy award, and global acclaim.

This album, titled simply Ali and Toumani, emerges from a second session, recorded two years later, and sits even more comfortably as a marriage between two disparate yet sympathetic streams of tradition from this West African musical wonderland. Mali is one of those artificial colonial constructs, with arbitrary borders drawn around more compact local groups of people united my smaller scale cultures.

Ali Farka Toure hails from the north, where 4 or 5 cultures regularly intersect, providing a hotbed of artistic influences. Toure plays what is widely identified as 'desert blues', and yet stems from influences far pre-dating the Afro-American idiom that grew from the melding of slaves' music with the European inflections around them. Sparse and jagged guitar lines seem to suggest what Martin Scorsese has identified as ' the DNA of the blues'.

Toumani Diabate hails from the south of the country, where traditions are different again. Diabate comes from a noble griot family whose music was more self-contained, and in a way more sophisticated. He is an acknowledged master of the kora, a 21 string harp with sparkling tones and marvellous resonance, and has expanded the reach of the kora to include multiple parts played simultaneously. As such his musicianship is impeccable, inventive, and melodically marvellous.

It's difficult to imagine more enthralling music. The disc features some vocals, but mainly a lot of instrumental playing, rich with delightful artistry and an absorbing palette of musical hues. Intricately played melodies are full of lift and spirit, beautiful cascading poems distilled by this pair of inspired players. The two masters easily adapt to each others musical forms, and gel magnificently on every number.

A frisson of poignancy permeates the project though, as Ali passed away from bone cancer in early 2006, shortly after the recordings were made. He leaves behind him a rich legacy, both in his solo albums, and in the two collaborations with Diabate. This latest, and last release, is a resounding tribute to a great man, and an enthralling and immensely enjoyable album from a pair of stellar artists.