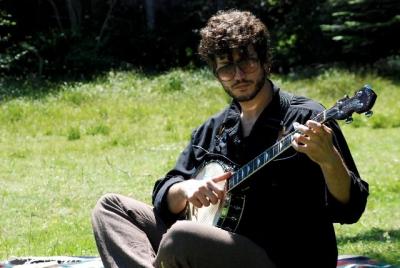 Hailing from Victoria, BC, nearly the farthest west (or left) one can be, Oliver Swain is Canada's quintessential folk and traditional musician. He eats, sleeps and breathes music, and his prolific career evidences this in many ways. With his pure, finely tuned vocals that have an astonishing range, and his undeniable skill behind a banjo or upright bass, Oliver grabs the attention of all who hear him, and holds it with his enormous sound and stature. From the most vulnerable and innocent sounding banjo ditties to the brave and imposing bowed bass, Oliver delivers his own brand of alternative folk and traditional music to the masses with a smile and a twinkle in his eye.

Oliver is a former member of such bands as The Bills - when they were known as the Bill Hilly Band - Scruj MacDuhk (before they morphed into The Duhks), Moody-Penner-Swain (with Ruth Moody and Jeremy Penner of the Wailin' Jennys), Outlaw Social, and Louisiana's Red Stick Ramblers.

His latest project sees him team up with Adrian Dolan (The Bills) on fiddle and accordion, Emily Braden on vocals, the amazing young Victoria guitarist Quinn Bachand, James Whittall on mandolin, and Josh Dixon on drums. The combo released In A Big Machine at the end of 2010. It's a truly stunning collection of songs - old and new - with Oliver's impressive vocal range and banjo styles to the fore.

Don't miss this CD launch concert in Vancouver. If it's anywhere near as spectacular as the new CD then folks will be talking about this show for years!