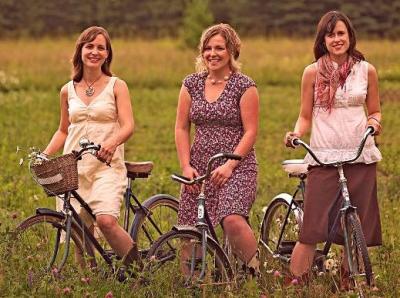 Winners of the 2010 Juno for Roots Album of the Year and of the 2009 New Emerging Artist Award from the Canadian Folk Music Awards - the Good Lovelies are making waves across Canada. The Good Lovelies are Caroline Brooks, Kerri Ough and Sue Passmore. Described as folk-roots and western swing, the Toronto-based trio combine three-part vocal harmonies with clever songs and witty onstage repartee.

Their first album, released in 2007, is a five-track EP, called Oh My! and features the playful single "Taboo". In 2009, they released their first full-length self-titled CD which contains 11 finely-crafted original songs. The album borrows styles from bygone eras and features CBC Radio favourite, "Sleepwalkin'". In November 2009, the Lovelies released a twelve-track Christmas album Under The Mistletoe which includes three original Christmas songs as well as a number of old classics. The album was met with positive reviews in The Globe & Mail and Toronto's NOW Magazine. The Good Lovelies toured with CBC's Vinyl Cafe in 2010 and can be heard singing backup on Jill Barber's album Chances.

Apart from spreading sharp, light-hearted music coast to coast the Good Lovelies appeared on CBC Kids TV in 2010 with Canada's favourite puppet Mamma Yamma and will appear on the PBS TV Special Girls from the North Country alongside Dala and Oh Susanna! Meanwhile the Good Lovelies are working on their second full-length release that fans can expect in the Spring.

SONiA of disappear fear has gained a devoted fan base in countries around the world with songs ranging from Reggae to Folk Rock. Her powerful honesty touches the hearts and minds of people of all social and ethnic backgrounds, underpinned as they are by the simple belief that people are people and love is love. This will be a remarkable double-bill at The Rogue!!

SONiA's latest album was released last summer. Blood, Bones and Baltimore is a return to SONiA's Baltimore roots and features all new songs with the exceptions of a longtime fan favourite "Biggest Baddest Heart" that SONiA has only previously played or recorded live and Woody Guthrie's "Worried Man Blues". This Blues Americana CD is a vast departure from the Award Winning and Grammy nominated World Album Tango, which featured songs in Hebrew, Arabic and Spanish as well as English.