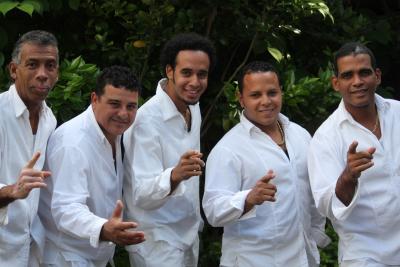 For the past few weeks, a Cuban quintet going by the name of El Grupo Cubano has been playing house concerts, Legions, cafes, and street festivals around the Lower Mainland. The group is in fact one of Cuba's most celebrated bands, real name: Brisas del Palmar, based in Santiago de Cuba. They played at The Rogue with New Zealand's Pacific Curls at the beginning of August, and whetted our collective appetite for more of their soaring harmonies and exhilarating stringband sound. Steve Dawson worked with them on a new recording at The Armoury, and this CD is now available. They will return to Cuba at the end of September, so this concert / dance will be both the official CD Launch and also their Farewell Party. We hope that they will come back again next year to play the Canadian festival circuit. Meanwhile, put on your dancing shoes! This band makes a compelling - and very danceable - sound!