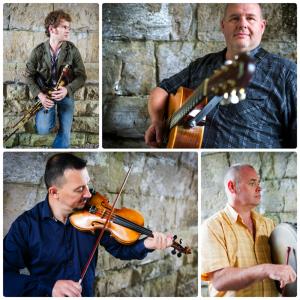 Since march 2003 Comas have been together as a band, before that, they toured individually in such top bands as The Drovers, Orion, Eileen Ivers, and with Liz Carroll, to name just a few... Although coming from diverse musical backgrounds, and residing in different parts of the globe, they found each other in their similar approach to music, bringing together their many cultural influences to forge a unique blend of Traditional Irish music that literally had them, within months of coming together, playing on Major Festivals in Ireland/ Belgium/France/ England/ Denmark/ Holland.

When you hear Comas you'll know that their choice of name was no mere coincidence. (Translating from Irish/ Gaelic as POWER) And power is exactly what this band is about. Depicting their own driving power coupled with a fine sensitivity for the inner strands of magic that is inherent in Irish music. Here, their Fiddle player, Aidan Burke - cousin of fiddle legend Kevin Burke - comes into his own, delving deep into his Irish roots to pluck out a pure sound that transcends time and place guaranteed to touch any lover of Celtic music. Aidan's dexterity is evenly matched by the awesome talents of Isaac Alderson (flutes, pipes), Philip Masure (Guitar) and Jackie Moran (percussion).

Comas plays enormously fast but with a lot of feeling (S.feys-folkroddels). Comas are a band firmly rooted in Irish music; open to new influences and writing their own tunes as well, they keep a respectful eye on the past. Comas is at the fore-front of traditional Irish music today. They have just released their 2nd CD, Charge, and it's a cracker! Don't miss their Canadian debut at The Rogue.