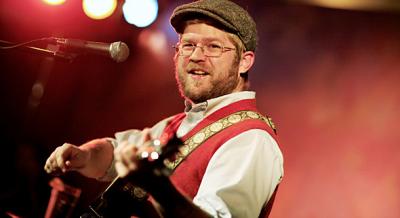 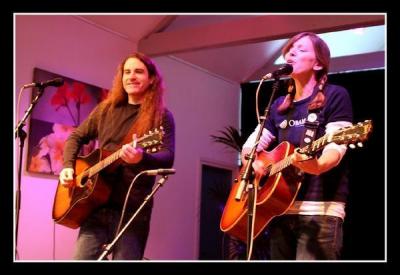 Old Man Luedecke, is one of Canada's best loved and most intriguing roots singer-songwriters. An original, he is a musical singularity to be savoured and shared, says the Vancouver Folk Festival. His memorable melodies, poetic sense and easy charisma appeal to anyone searching for new growth from old roots. He was born in Toronto but has made his home for years in the music rich maritime province of Nova Scotia. There his music has been wholeheartedly adopted and is becoming representative for its traditional storytelling folk elements. It speaks to a new generation of people craving such meaning in their music.

His performances are exciting and totally entertaining. His uncliched banjo playing sparkles beautifully and dynamically. This coupled with his thumping foot creates a complete sound. People are drawn into singing along. His singing is his own. Clear and unadorned it is totally emotive and suits the sincerity of his tunes. In the breaks between songs come wild and charming stories of meeting heroes and easygoing but gripping musings on things ridiculous and sublime that may have a wink of contemporary vaudeville. Equally at home on festival main stages, theatres and living rooms, he can hold court in the occasional indie rock bar. Luedecke has been a featured performer at all the major folk festivals in Canada and Australia and an increasing number of American festivals, like Strawberry in California. He has appeared with and shared the stage at concerts and soft seaters with such performers as Feist, Tim O'Brien, Joel Plaskett, David Francey, Buck 65, The Be Good Tanyas and Jill Barber. He's shared festival stages alongside Bela Fleck, Tim O'Brien, Jack Elliot, Kris Kristofferson, Ashley MacIsaac, and countless others.

Old Man Luedecke has received great recognition for his works, including Juno Awards (The Canadian Grammy) for "Proof of Love" and "My Hands Are On Fire and Other Love Songs." He played here in June with Del Barber at The Rogue, and we are delighted to say that he has a brand new CD, Tender Is The Night (Borealis Records), and he is currently touring to celebrate its release. For a limited time you can download 5 songs from the album for free on his website.

Few husband-wife musical duos provide audiences with the complete entertainment package that Stacey Earle & Mark Stuart dish out in a live performance. Armed with clever acoustic guitar interplay, autobiographical songwriting, lovely harmonies, and humorous storytelling this couple captivates your attention from the first moment they are onstage. Based out of Tennessee, Earle and Stuart draw from blues, pop, country, rock, and more in their heartfelt music. The years of touring the folk/Americana circuit (playing 170 concerts a year) have given them a knack for reaching out to the audience in an intimate "come in to my living room" fashion.

Stacey and Mark own their own record label, Gearle Records, and have made 8 CDs over the years. Since meeting in 1992 and marrying in late 1993, the partners have toured the USA, Canada, and Europe repeatedly. They left the environment of pursuing a major label deal in Nashville in 1998 to target small intimate venue crowds in theatres, coffeehouses, festivals, clubs, and house concerts. This has become their home and they are a recognized fixture on the folk music trail they blaze.

This double-bill promises to be on of the best nights of original songwriting that we've ever presented at The Rogue!