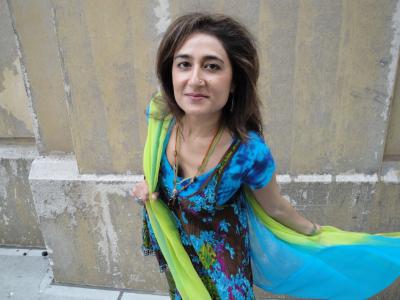 A voice destined to enchant more than one generation (fROOTS)

Her crystal clear voice arched superbly above rhythms that coursed through the audience. - Los Angeles Times

A powerful woman with depth of character in her wonderfully pliable, expressive voice. The Observer UK

Expressing her muse through ghazals and Punjabi folk songs, Kiran Ahluwalia explores the language of the heart with beautiful artistry and smoldering intensity. Born in India, raised in Canada, and now living in New York City, her enchanting and seductive music has garnered glowing praise from critics around the world.

At the 2012 JUNO ceremonies Kiran's latest CD, Aam Zameen: Common Ground was awarded Canada's prestigious BEST WORLD MUSIC ALBUM OF THE YEAR, and was selected by the UK's Songlines magazine as one of the Ten Top of the World CD's. Kiran also won the Canadian Folk Music award for World Solo Artist of the Year.

It's incredibly invigorating to see how much interest my music is sparking, says Ahluwalia. When you're doing something with no clear blueprint it's hard to know if it's working. But I'm getting lots of feedback these days that it's working, she adds with a laugh.

With each successive recording project, Kiran has moved ever onward from her own musical upbringing, reaching well beyond her extensive training in the genres of ghazal and Punjabi folk song. Her compositions and arrangements are a reflection of an ongoing quest to create timeless music that looks to the future while still maintaining a vital through line to its storied past. On her latest CD she collaborated with legendary Tuareg band Tinariwen. Previous recordings have found her fusing the sounds of her native India with Portugese fado and the Celtic fiddle of Natalie MacMaster.

Her discography, now five albums deep, is one of global music's most interesting furrows. Her ease of manner on stage makes her a unique and inspiring performer whose legion of fans continues to grow with every captivating performance.

I like to connect things that I am passionate about even if they are outside my Indian musical upbringing, says Ahluwalia. When it works its nothing short of sublime. It's really the essence of everything for me.