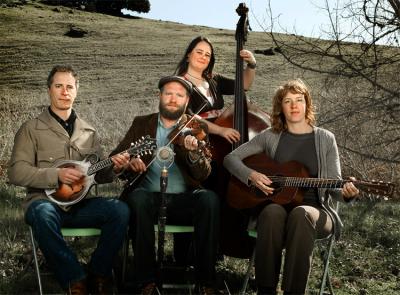 Portland's Foghorn String Band stands at the top of today's vibrant old-time music revival and a fine example of what an unending revival it is. Each album finds them deeper into the tradition, more familiar with the rich resources of roots music, and more focused, but still propelled by that undercurrent of punk energy. - Art Menius, WMMT

Internationally acclaimed Foghorn Stringband has been at the vanguard of a revival in American old-time music for over a decade now. They've traveled the globe, been signed to a major label, and inspired a new generation of old-time musicians, all without compromising their love of traditional American music. But they've gathered new ideas and new band members too. Their unique sound still comes from the fiery, intertwining melodies of Stephen "Sammy" Lind's fiddle and Caleb Klauder's mandolin, but now they're supported by the bedrock-solid rhythm foundation of Reeb Willms' guitar and Nadine Landry's bass. And when it comes to vocals, they deliver; four powerful and exceptional voices resulting in countless combinations of harmonies. A typical Foghorn set is based around exquisitely rare old-time tunes and songs, but a vast knowledge of early country music and recent explorations in Cajun song traditions have molded a powerful new sound. Any band would be happy to have mastered one music genre, but Foghorn Stringband have a roaming spirit, and are already sparking new revivals of American roots music traditions.

They play the old way, the way you'd have heard stringbands play on Southern radio stations back in the 1930s. They don't fancy up the music to make it more modern, instead they reach deep into the heart of the songs, pulling out the deep emotions that made them so enduring in the first place. It's a whole new world today for folk musicians, but the four powerhouse musicians in the Foghorn Stringband prove that they're still riding on the cutting edge, with one foot in the analog past and one foot in the digital future.