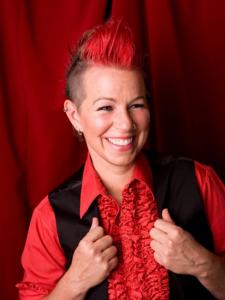 Sure same-sex marriage is legal these days, and gay people don't get fired from their jobs like they used to, but the growing number of queer parents and openly queer youth means that young people are facing homophobia like never before. Moved by stories of depressed queer teens and kids with queer parents feeling isolated and ostracized, award-winning lesbian singer-songwriter and musical comedienne Kate Reid embarked on her most audacious recording project yet. She conducted 74 interviews with queer parents, queer kids, and straight kids of queer parents and used them to create Queer Across Canada, a pioneering collection of songs for queer families that bursts with a spirit of radical celebration of the rainbow spectrum.

Kate's hilarious stage presence and her sometimes-witty, sometimes-heartbreaking songs about LGBT life have endeared her to audiences across the country, helping spread the gospel of acceptance and welcome well beyond its usual demographic. She was voted "Discovery of the Year" in the 2009 Critic's Poll published in the Canadian folk music magazine Penguin Eggs. She earned a standing ovation during her debut Canadian festival performance at Guelph's Hillside Festival, and she has performed at the Edmonton Folk Festival, the Vancouver Folk Music Festival, the Michigan Womyn's Music Festival, and countless Pride events. She's also been nominated for a Canadian Folk Music Award and a Toronto Independent Music Award.

With Queer Across Canada, Kate is now developing a musical education kit to help teachers formally introduce both the songs and their lessons to their students. The kit includes the 17-song CD and an educational resource for the classroom, which pairs activities and exercises with the songs. Kate's goal is to help teach about gender and sexual diversity, homophobia and heteronormativity, while also promoting acceptance of diverse people, families and communities.