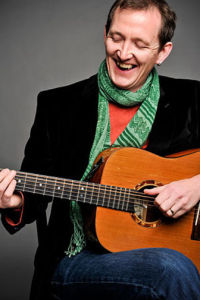 Long considered one of the most important guitarists in Irish and acoustic music worldwide, John Doyle is now increasingly lauded for his singing and songwriting talents. From a musical family in Dublin, John's influences include English folk singers Nic Jones, Martin Carthy, Richard Thompson, and The Watersons; Scottish singers Dick Gaughan and John Martin; and fellow Irishmen Paul Brady and Al O'Donnell as well as his father, Sean Doyle - probably the biggest influence of all. John went on the road as a pro at 16 with the group Chanting House which he formed with Susan McKeown and went on to create the highly acclaimed group, Solas, with Seamus Egan, John Williams, Karan Casey and Winifred Horan which took the folk and Celtic music worlds by storm, in no small part due to John's powerhouse rhythmic guitar style and innovative arrangements.

After leaving Solas, John has gone on to perform and tour with other greats in the Folk, Celtic and Bluegrass worlds. He has appeared on soundtracks for the feature film, The Brothers McMullan, Soldier, PBS's Out of Ireland and also composed the music for the film Uncle Robert's Footsteps and the play Down the Flats as well as performing on countless recordings as guitarist and/or singer for many other notable artists. In recent years, John has gained major prominence in the Celtic and Folk worlds in duos with Chicago fiddler Liz Carroll; as Karan Casey and John Doyle; as McGoldrick, McCusker and Doyle; and as one third of the stellar trio "The Teetotallers" with Martin Hayes and Kevin Crawford. 2008-2010 saw John on the road with folk legend Joan Baez as her music director and guitarist.

With the release of John's most recent solo recording, Shadow and Light, his significant talents as songwriter and singer are finally coming to the fore. Impossibly in demand in the studio and on the road, immensely talented and blessed with an acute ear, a wicked sense of rhythm and a seemingly endless bag of chops, John has firmly established himself as one of the most versatile, creative and prolific voices in folk and traditional Irish music.