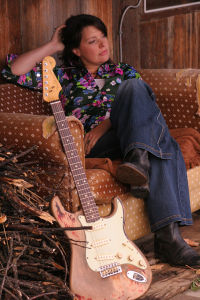 Canadian songstress and slide guitarist Rachelle van Zanten, whose raw melange of blues, folk, Americana and serious guitar-shredding is currently shaking up an audience of its own.After 11 years in the trenches, Canadian slide guitarist Rachelle van Zanten is done with bands. In 2006 she released her first solo album, "Back to Francois", which is packed with funky blues riffs and stellar slide performances. The surprise is that van Zanten juxtaposes her gutsy guitar playing with very personal and introspective lyrics - a stylistic trait she attributes to her diverse influences. - Guitar Player Magazine

In her "spare" time, van Zanten in the producer of Canada's Rocker Girl Camp, a motivational music camp for young women ages 10-17. (www.rockergirlcamp.com)

Also, find out more about Reconciliation Week and how it ties in to Rachelle's concert: www.roguefolk.bc.ca/news