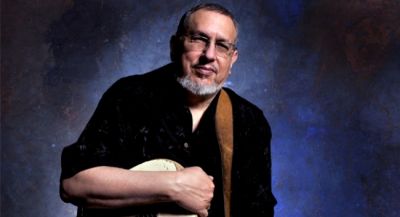 THIS SHOW IS NOW SOLD OUT. However, there may still be some tickets available at Rufus' Guitar Shop or Highlife Records. If you have reserved tickets with us already just get there early.

N.B. We are no longer accepting Reservations for either Parcel O'Rogues or Complimentary tickets.

“The reason man created stringed instruments. David touched them with a lover’s fingers and they moaned that true love right back at him. Wood and wire and flesh spoke.”
– Jerry Jeff Walker on David Bromberg

He’s played with everyone, he’s toured everywhere, he can lead a raucous big band or hold an audience silent with a solo acoustic blues. Born in Philadelphia in 1945 and raised in Tarrytown, NY, “as a kid I listened to rock ’n’ roll and whatever else was on the radio,” says Bromberg. “I discovered Pete Seeger and The Weavers and, through them, Reverend Gary Davis. I then discovered Big Bill Broonzy, who led me to Muddy Waters and the Chicago blues. This was more or less the same time I discovered Flatt and Scruggs, which led to Bill Monroe and Doc Watson.”

Bromberg began studying guitar-playing when he was 13 and eventually enrolled in Columbia University as a musicology major. The call of the Greenwich Village folk scene in the mid-’60s drew David to the downtown clubs and coffeehouses, where he could watch and learn from the best performers, including primary sources such as his inspiration and teacher, the Reverend Gary Davis. Bromberg’s sensitive and versatile approach to guitar-playing earned him jobs playing the Village “basket houses” for tips, the occasional paying gig, and lots of employment as a backing musician for Tom Paxton, Jerry Jeff Walker and Rosalie Sorrels, among others. He became a first-call, “hired gun” guitarist for recording sessions, ultimately playing on hundreds of records by artists including Bob Dylan (New Morning, Self Portrait, Dylan), Link Wray, The Eagles, Ringo Starr, Willie Nelson, and Carly Simon.

An unexpected and wildly successful solo spot at the 1970 Isle of Wight Festival in Great Britain led to a solo deal with Columbia Records, for whom David recorded four albums. He collaborated with the likes of George Harrison and Jerry Garcia, and his band included such luminaries as Andy Statman and Jay Ungar. But in 1980, tired of endless tours, he folded the band and studied violin making. He eventually opened an instrument repair store in Delaware, and was not lured back into the recording / touring world again until 2007, when he released a solo blues album, Try Me One More Time. In 2011 he released the amazing album, Use Me, which featured many songs written just for him.

He came to The Rogue that year, with Ollabelle as his backing band. It was his 66th birthday that night. We gave him a cake at the end of a remarkable concert. In 2012 he was the subject of the documentary David Bromberg: Unsung Treasure, and he is featured on Dylan’s latest retrospective box set, The Bootleg Series Vol. 10: Another Self Portrait. David has just released Only Slightly Mad with his new Quintet. It has already garnered a Grammy-nomination. The new record showcases his versatility as he crosses musical boundaries from Celtic to Blues, from Bluegrass to Gospel, and from Old Time to his trademark break-up rants! We are delighted to bring him back - this time with his amazing band in tow.