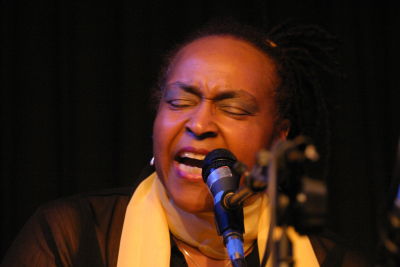 Since 1992, Linda Tillery and the Cultural Heritage Choir, have become world renowned for their breathtaking performances and commitment to the authenticity of African-American roots music and music from the African diaspora. Their vocals are gritty and soulful. Their rhythms are a fusion of Southern American grit and Carribean heat!!

The groups first collaboration with veteran performers Taj Mahal and Eric Bibb titled "Shakin' A Tailfeather," was nominated for a Grammy © [1997] and their second collaborative effort "Hippity Hop," was awarded a Parents Choice Award (2000). The group's (2003) recording titled "Say Yo' Business", was nominated for a California Music Award.

If you would like to delve deeply into the diverse resources of African-American roots music and learn the tradition of call and response and the rhythms that drive this music, the Cultural Heritage Choir will show you how its done. The CHC serves up healthy portions of Work Songs, Spirituals, Children's Play Songs, Field Hollers, Moans, Ring Shouts, Plantation Dances and a little bit of R&B!