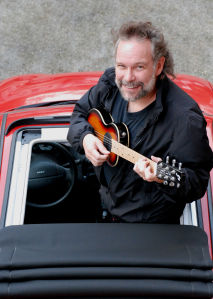 JOHN GORKA is an honored icon of folk tradition. Energetic acoustic music that is not a trend, not a fad, but an expression of everyday life, is his trademark. John’s rich baritone voice and unique songcraft weave a magical spell that can only be described as ‘Gorka.’

John will be releasing his brand new album, Bright Side of Down, his first release in over four years. The acclaimed songwriter is widely regarded as “one of contemporary folk music’s leading talents” (Vintage Guitar). The album’s 12 songs are beautifully produced and sequenced from beginning to end. With guest vocal appearances by Red House labelmates Lucy Kaplansky, Eliza Gilkyson, Claudia Schmidt and Michael Johnson, the collection resonates with the classic, “Gorka-esque” sound and lyrical insight that’s earned him generations of devoted fans and a career that’s found him gracing the stages of PBS’ Austin City Limits, NPR’s Mountain Stage and venues worldwide.

Joining John on this tour is Boston-based, world class singer songwriter Antje Duvekot. Her unique blend of 'chamber-folk" is helping her develop an audience around the world. Blending uncommonly beautiful vocals with one of the sharpest poetic sensibilities in her field, she has a remarkable ability to make us believe she is whispering secrets in our ear, and we know that she believes every word she sings.

No one writes quite like Antje, who was influenced lyrically by the very greats -- Dylan, Joni Mitchell, Paul Simon and Leonard Cohen, who are Mt. Rushmore-like figures to her. "Antje is the rare artist who can write about the social and the personal in the same breath,'' says folk icon Ellis Paul. "Her voice has a sound of innocence and naivete which makes razor-sharp insights into the human condition.'' Adds producer Neil Dorfsman, who has worked with Dylan, Bruce Springsteen and Sting: "She creates an entire, detailed world in verse, and takes you there with beautiful and understated melody. Her songs are stunning paintings of color and shade.'' And as Springsteen biographer Dave Marsh says, "Antje is the whole package.''