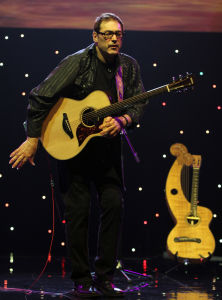 He’s at home on stages all over the world, but it has been quite a while since Don Alder performed a full solo concert in his own home town, Vancouver. Don will perform songs from his a variety of albums, as well as some news songs from his upcoming album that’s in progress. Alder is an artist with an interesting guitar collection and this being a local performance he has promised to bring a cast of unique stringed instruments that one could spend hours just viewing. And speaking of everything Rogue, the 2012 Worldwide Guitar Idol winner should be in fine form to perform his winning song titled “The Rogue”.

Alder will be performing at a variety of festivals this summer, travelling to the USA, and touring Germany and the UK. Alder’s recent activities include performing at the recent All Star Guitar Night, a promo video shoot with the Ernie Ball String company, being hand selected by Lee Ritenour to be on the advisory panel for the global Six String Theory competition and writing guitar columns for the online UK based Guitar Interactive Magazine.

Don Alder is a modern-day Acoustic Guitar Renaissance Man with a "wow factor". He brings an unparalleled dynamic intensity to the stage. (Crowned winner of the 2007 International Fingerstyle Competition, Guitar Player Magazine’s 2010 Guitar Superstar Champion, and 2011 Worldwide Guitar Idol winner) Alder has over 3 million views on YouTube and has also received a Brand Laureate Award from the country of Malaysia for using his guitar and his music as an ambassador to enhance the lives of others. He has performed at many of the All Star Guitar Nights. In 2012 Don was selected to play the NAMM Breakfast of Champions and was also invited to perform at Vancouver TEDx. He creates a wall of sound with just an acoustic guitar and is often called the Hendrix of acoustic guitar. His performances leave people wondering how one guy with just a guitar and no effects can make so many sounds. Alder is highly entertaining musician mixing chat and humour within his performances and leaves audiences talking for days. Don’s heart is also as big as his talent. From 1985 - 87, Don put his music career on hold to assist his lifelong friend, Rick Hansen, with his quest to help others by going around the world in a wheelchair.