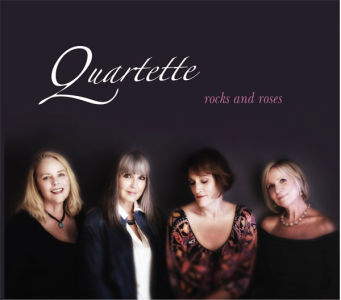 Since their debut in 1993, the four members of Quartette have been both publicly and critically acclaimed for their lush harmonies and delightfully diverse repertoire. Cindy Church, Caitlin Hanford, Gwen Swick, and Sylvia Tyson are seasoned singer/songwriters whose influences range from blues and gospel to folk and country to jazz and pop.

The group’s first appearance, a showcase of Canadian women songwriters, took place at Toronto’s Harbourfront Centre. What began as a “songwriter in the round” concert of musical friends grew into an inspired collaboration. This initial performance generated an appearance on CBC Radio’s Morningside with host Peter Gzowski. The phones began to ring with requests for a recording, and seven months later in April of 1994, the self-titled album, “Quartette,” was released to rave reviews. This was followed by coast-to-coast tours of theatres, folk festivals, performances with symphony orchestras, and live appearances on radio, including two appearances on Garrison Keillor’s A Prairie Home Companion.

In 1995 a second album, “Work of the Heart ,” was released and, following this, CBC’s Adrienne Clarkson Presents profiled the group in an hour-long special.

With the untimely death of original member, Colleen Peterson, in 1996, Quartette elected to continue performing, and welcomed another musical friend, Gwen Swick, to the group. Gwen’s skills as a songwriter and vocal arranger carried the group to a new level as they prepared to record once again, and the result was “In The Beauty Of The Day,” released in 1998.

Quartette has received several Juno nominations, won a Canadian Country Music Award for best vocal collaboration, performed with major symphony orchestras across Canada, and recorded the CMT-TV special, “A Quartette Christmas.” They have also released two Christmas CDs, “It’s Christmas!” in 1996, and “I See A Star” in 2002, both of which are collections of traditional and original Christmas songs, and their Christmas shows have become a tradition with audiences across the country.

Quartette continues to tour and record. In October of 2007, they released their sixth recording, “Down At The Fair,” produced by legendary guitarist, arranger and producer Colin Linden.

An evening with Quartette is always a magical musical journey.