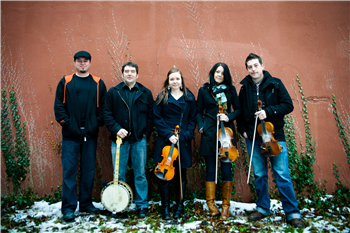 CÒIG ("Ko-ig". Gaelic for '5') is an exciting ensemble consisting of five solo acts, and is one of Cape Breton’s most captivating young bands. Originally coming together for a promotional tour for the Celtic Colours International Festival, the formation proved to be something special, and the group decided to continue to tour together as a band. Proving to be a serious force to be reckoned with in the traditional music scene with their driving tunes, haunting songs and infectious energy, Còig is a treat for the ears of every audience they meet.

Fiddler Chrissy Crowley, from Margaree, Cape Breton has an impressive list of awards, nominations, and international appearances. Chrissy embraces her Celtic roots and makes them her own, through original compositions coupled with contemporary arrangements of traditional tunes.

Darren McMullen, from Hardwood Lands, NS, is a highly sought after multi-instrumentalist. Easily switching between guitar, mandolin, whistle and banjo with Còig, this "Swiss-army knife" keeps the rhythm sound diverse, and is sure to impress with his lead playing of his various “on-stage weapons”.

Rachel Davis from Baddeck, Cape Breton spends her time switching from international festival stages to small local dances at home. In a genre that sees many performers pushing the envelope and testing new waters, her style of playing traditional tunes in a traditional way is a refreshing reminder of why the Cape Breton fiddle style drives so hard, and is so sought after.

Colin Grant from Sydney, Cape Breton has been touring steadily as a solo performer, as well as with Sprag Session. His respect for traditional style, combined with his drive to take the Celtic fiddle to new places results in an exciting sound that is as much Buddy MacMaster as it is Ashley MacIsaac.

Jason Roach, from Chéticamp, Cape Breton is one of the most impressive piano players you will ever hear. With a style all his own, and an unparalleled intensity on the keys, you'll have to remind yourself that there's other players on the stage.

With a combined total of over 30 nominations and awards, each of Còig’s talented musicians have released their own successful solo albums, and have toured both at home and abroad before coming together as this exciting super group. Còig’s much anticipated debut album is due for release in the spring of 2014.