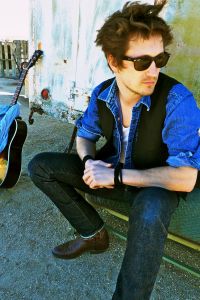 Del Barber grew up in the Canadian Prairies, and the landscape is as much a part of him as the people he has met along the way. From the fertile Red River Valley to the pastures of the west, straight into the factory floors and slaughter houses of the city, Barber’s fourth album, Prairieography, is born out of a love for his home, its people and their stories. Recorded at Empire Recording in Winnipeg, the album is blanketed in warmth, subtle textures and true-to-life imperfections; the rhythm section was captured live to analogue tape and uses audio sounds from combines and augers.

In an effort to take his creative process to new heights, Barber undertook a painstaking approach to achieve an organic sound. The reverb was recorded inside a 150-foot grain silo. “We had to disassemble the studio, scale the walls of the silo, hang microphones and a speaker,” Barber describes. “We amplified the instrument, like the pedal steel, into the silo and recorded again, then the track would have to be synched up with the song.” Prairieography was produced by Barber and his trusted steel player Bill Western. Using the digital and analogue recording techniques, Barber manages to channel the classic records of past heroes while still standing firmly on his own.

Barber sings from the heart about his roots, telling tales from the road, and offering incredibly personal and sincere observations of the world around him. There is an unexpected blend of old-time country and Cajun boogie on “Living With A Long Way to Go”, however Barber maintains his characteristic storytelling style with “Farewell, God Bless You, Goodbye,” a story about a young man trying to escape the hum of the city.  “Walking In A Straight Line,” written in the present tense, chronicles a trip he took to the Yukon from Winnipeg via the Rockies. On “All That it Takes,” Barber enthuses, “Sometimes three chords and a light heart are enough to make a good song. We really wanted to incorporate a few songs, like this one, on the album that would lean on heavy grooves and simple soul-driven rhythm sections.”

Barber has emerged as one of the next wave in this country’s proud tradition of songwriting talent. The follow-up to his award-winning albums Love Songs for the Last Twenty and Headwaters, Prairieographyis the earnest travelogue of a wandering troubadour, and the realization that creativity is rarely a bolt of lightning. Good songs are the result of hard work, calloused fingers and learned lessons from a life well lived.