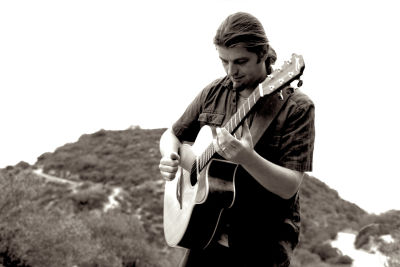 The extraordinary & two time winner of the National Fingerstyle Guitar Championship, Don Ross, continues to move and excite new fans and artists around the globe. In this exciting new event, Don Ross presents American-Austrian Thomas Leeb, the next generation of fingerstyle guitar.

Thomas Leeb picked up the guitar for the same reason as every thirteen-year-old boy: he wanted to meet girls. He soon fell in love with the instrument, played his first solo concert at the age of fifteen and released his first acoustic guitar album at seventeen. Leeb is a frequent performer at concerts and festivals in Asia, the Americas and Europe and has been featured in numerous guitar magazines all over the world. Every year, he teaches workshops and master classes in universities and colleges and his album “Desert Pirate” was voted one of the essential albums of the last twenty years by Acoustic Guitar Magazine.

His peculiar guitar style owes as much to percussive techniques as traditional fingerstyle guitar. What sets Thomas Leeb apart from some of his contemporaries is his ability to make pyrotechnics serve the music. Three years studying West African traditional music give him a sense of timing and groove that is unusual in a guitarist. All this has earned him a loyal world-wide following and influential fans such as Eric Roche who was his guitar teacher, “for about five minutes and then I heard him play”, Jon Gomm awarded him “ten out of ten Gomms” and Guthrie Govan who thinks that “what Thomas does on an acoustic guitar probably shouldn’t be legal.”

One of today’s true innovators of guitar composition and technique, Don Ross has emerged as one of the most respected musicians in Canada and one of the top guitarists in the world. In September 1996, he managed to do what no other player has done: win the prestigious U.S. National Fingerstyle Guitar Championship for the second time (he first won in 1988). The competition, held yearly in Winfield, Kansas, cannot be won only with immaculate technique, but the player’s music must also display a high degree of emotion and intensity — hallmarks of Don’s style.