We regret to inform you that Ellis Paul has had to cancel his mini-tour of B.C. due to unforeseen circumstances. We hope to reschedule a show in 2015. Ticket buyers may apply for a refund or to transfer their purchase to a different show.
Concert poster 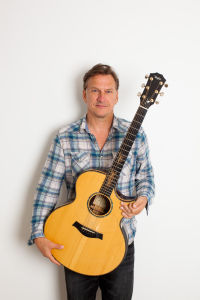 Paul’s new album, Chasing Beauty, is a set of songs which detail, in typical Paul fashion, stories of people and places that reflect larger truths about us all. In reality, these stories are a continuation of tales Paul has told for more than a quarter century, over the expanse of 19 albums, numerous critical kudos (15 Boston Music Awards alone), inclusion in several movie soundtracks, and stages he’s headlined both near and far. “I’ve got a car with over 4​75​,000 miles on it, and it's my third road vehicle,​” Paul declares. “I’ve been doing 200 shows a year for over twenty years. There isn’t a town in the country where I won’t find a friend. I’m a nomad. And I’m gonna write and play until I’m gone.”