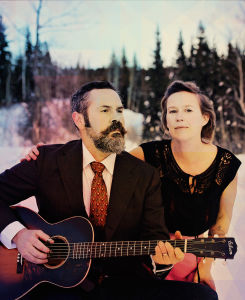 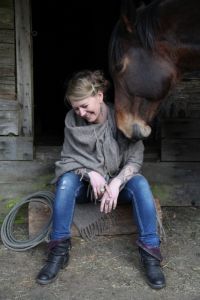 You may feel as if you recognize every song on Pharis & Jason Romero’s third duo album, "A Wanderer I’ll Stay", even though they may be songs they’ve written themselves or sourced from rare field recordings. What you’re recognizing is the phenomenal feeling that comes with a lifelong love and obsession with music. Pharis & Jason have both immersed themselves in folk traditions and spent their fair share of time on the road including stints with A Prairie Home Companion and CBC’s Vinyl Cafe Tour.

"A Wanderer I’ll Stay" has that feeling of a record made with great intention. Running the J. Romero Banjo Company by day, serving custom banjo clients around the world including Ricky Skaggs, Jerry Douglas, and Martin Simpson, the album was recorded in the Romero’s home workshop in Horsefly, BC by David Travers-Smith (The Wailin’ Jennys, Ruth Moody, Oh Susanna). This is the first of their recordings to bring in other musicians: Josh Rabie, John Hurd and Brent Morton traveled to this remote part of BC to record fiddle, bass and drums, and Marc Jenkins’ pedal steel was layered on from a studio in Victoria, BC.

Surrounded by old friends they arranged songs, ate food, and played music for joy’s sake when it wasn’t being recorded. Listening to the album strikes a similar feeling to looking at an old photograph. It is as though their music taps into something larger than us, and reminds us of where we came from.

Pharis' sister Marin will open the evening. Marin Patenaude is an old soul, as they say. She strums a vintage Gibson archtop guitar or finds solace in ivory keys, and gets lost in a heartbreaking, vocally dizzying, gut-achingly beautiful song of love, loss, family, and maybe a hint of politics, and genuinely doesn’t care if anyone is listening or not. You would be wise to, though. Profound poetry delivered by melodies not written for mindless radio exposes you to feelings and sensations that only a song can describe. Marin spent many years bending her will to classical piano and voice and studied vocal jazz in college. Time, though, has brought her to be a songwriter, vocalist and multi-instrumentalist in her own right, with a love for all things wild and many a story to tell. “Her songs were so pure and deep. Her voice, otherworldly. She was really absorbed in the music and so was I. She got me good.” - Ben Arsenault (Real Ponchos)