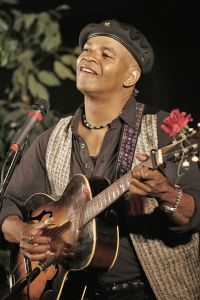 Guy Davis' creative roots run deep. Though raised in the New York City area, he grew up hearing accounts of life in the rural south from his parents and especially his grandparents, and they made their way into his own stories and songs. Davis taught himself the guitar (never having the patience to take formal lessons) and learned by listening to and watching other musicians. One night on a train from Boston to New York he picked up finger picking from a nine-fingered guitar player.

Whether Guy is appearing on “Late Night With Conan O’Brien” or nationally syndicated radio programs such as Garrison Keillor’s, “A Prairie Home Campanion”, “Mountain Stage” or David Dye’s,“World Café”, in front of 15,000 people on the Main Stage of a major festival, or teaching an intimate gathering of students at a Music Camp, Guy feels the instinctive desire to give each listener his ‘all’.

The routes, and roots, of his blues are as diverse as the music form itself. It can be soulful, moaning out a people’s cry, or playful and bouncy as a hay-ride.

Guy can tell you stories of his great-grandparents and his grandparents, their days as track linemen, and of their interactions with the infamous KKK. He can also tell you that as a child raised in middle-class New York suburbs, the only cotton he’s picked is his underwear up off the floor.

He’s a musician, composer, actor, director, and writer. But most importantly, Guy Davis is a bluesman. The blues permeates every corner of Davis’ creativity.