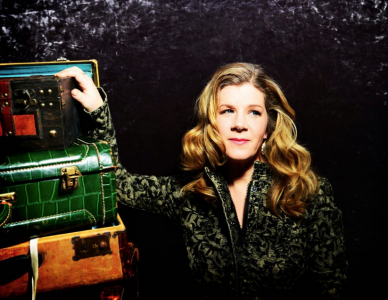 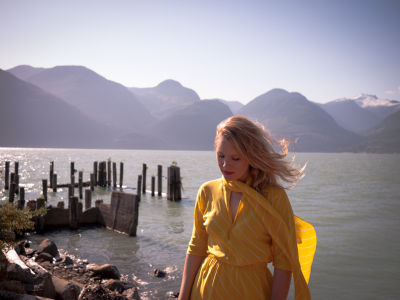 Every new album from Dar Williams represents her thoughts and feelings about both her own life and larger forces in the world. But her ninth studio record, Emerald, marks a particularly dramatic confluence between her experiences and broader contemporary culture—and what it means to be a songwriter at this moment in history.

In the past few years, Williams has been involved in a wide range of different efforts and projects: teaching a course titled “Music Movements in a Capitalist Democracy” at her alma mater, Wesleyan University; working with children at several summer camps; leading songwriting workshops; getting involved with the workings of her village; and writing a book about the ways she’s seen towns becoming more independent and prosperous over her twenty years of touring. In addition, in the face of dramatic transformations in the music industry, she is releasing Emerald on her own after choosing to part ways with Razor & Tie, her label for almost twenty years.

If friendship and human connection lie at the heart of Emerald, Williams had to put these ideas to a very real test when she decided to crowd-fund the making of the album through Pledge Music. While it was an adjustment getting used to sharing as much as possible from the album’s sessions with her fans and followers, she enjoyed the opportunities for interaction. “Pledge for me is like swimming in a pool,” she says. “My fans are smarter than I am, I like being around them, so I said, ‘Whatever you want me to do, I’ll do it.’ When we started thinking about, ‘How do you want to fundraise for the album?,’ it was actually a very fun discussion. I heard that people want to know about the recording process. I had kind of forgotten the wonderful Alice in Wonderland feeling of first coming into the studio twenty years ago, and the Pledge campaign reminded me.”

It’s a cliché that the personal is the political, but for Dar Williams, there really is no separating her life from her worldview. And in the face of a shifting world, she is more aware than ever of the power this approach can create. “I’m now experiencing the fruits of the alternative culture I was part of in the ‘90s,” she says. “I think I’ve made choices about how I lived my life, outside of the world that was going to fit me among the mainstream norms, and I chose to stay with my friends, to stay with my culture. “That turns out to have been the sturdiest structure I could have built for myself. And that’s in my songs, it’s in my teaching. I’m a believer in what can happen when we make music together.”

(Ed: A new Dar Williams CD feels like a letter from a friend I haven't heard from in a while. Deeply personal, full of stories and in this case, a cover of one of my favourite songwriters: Joe Strummer's Johnny Appleseed. Amazing stuff. Thanks, Dar! See you soon.)

Vancouver songwriter Lydia Hol will perform a short opening set. Since the release of her debut EP, Boats, in 2012, Lydia Hol has toured the country from coast to coast, filling rooms with her songs and stories. She’s shared the stage with folk legend Sylvia Tyson and become a favorite on the CBC. Lydia’s time spent living in Ireland flavours her performances with a storyteller’s honesty and charm. Her new full length record Heading North, is set to be released in January 2016, capturing a delicate, elegant take on folk, with tinges of everything from country to classical and beyond.  Lydia's full CD Launch will take place at The Rogue January 23 2016. Stay tuned!