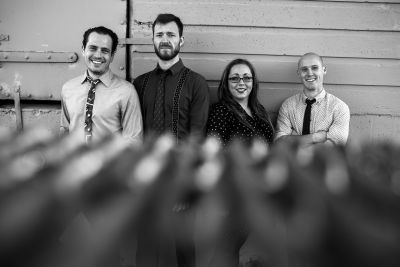 The Fretless is a new approach to folk music that has quickly gained high praise around the world.  This unique band is taking string music to fascinating places as it transforms fiddle tunes and folk melodies into intricate, beautiful, high-energy arrangements.

The Fretless just finished recording their 3rd album, which will be released in the summer of 2016. This album is focused on original music, with a few traditional tunes thrown in the mix. The sound of this album follows the trajectory from their first two albums, and aims to expand the rhythmic, harmonic and structured style of the many folk genres they play using only string instruments.

As a band, Karrnnel Sawitsky, Eric Wright and Trent Freeman have come from very different traditional and contemporary backgrounds, and are influenced by a vast array of art. They are unified in their goal to continually develop their amalgamated sound in order to push traditional and folk music as far as possible.

The Fretless perform a high energy and dynamic show playing folk music in a way that has never been heard before. This folk music quartet not only delivers expert musicianship and eye-catching performance, but also a show that makes you feel the passion they have for the music. Individually they each come from a family tradition of music and they bring these rooted traditions to the stage – that which has shaped their musical identities.

Since forming in the fall of 2011, The Fretless has toured all across the world, including three 5-week tours of Europe, 6 tours across Canada, and 3 tours across the USA.

Every show The Fretless performs, the audience is left with a new idea of how this style of music can be played and performed. The Fretless is an innovation in music that must be heard.