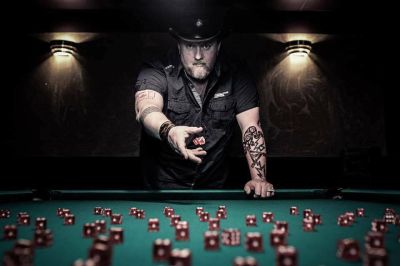 J.P. Cormier is a gifted multi-instrumentalist and singer-songwriter who reads the times with songs. He has released more than a dozen records including two career retrospectives, and a book of the tunes featured on his guitar album. During his long career, he has won many competitions, including the Canadian Open Guitar Championship, the Southern U.S. Fiddle Championship, and the Southern U.S. Banjo Championship. He has also worked with a number of big-name artists and appeared on the ever-popular Grand Ol' Opry over two dozen times. His debut album, Out of the Blue, was released when he was only 16 years old. J.P.'s impressive body of work has earned him a vast and loyal fan base and multiple award nominations and wins, including 12 East Coast Music Awards, Canadian Folk Music Award, 5 Music Nova Scotia Awards, Juno nominations, commendations from the Governor General of Canada and Premier of Nova Scotia.

When most kids were just starting kindergarten, he was already showing a strong interest in music. Soon that interest proved to be an impressive natural talent. He taught himself to play the guitar. It would only be the first of many string instruments he would master in the coming years. Not long after Cormier's 9th birthday, he won his first guitar competition, holding his own against musicians of all ages. He landed his first steady professional job when he was only 14. It was a weekly bluegrass television show called Up Home Tonight. Two years later came the release of his debut album filled with instrumental bluegrass music that showcased his guitar skills.

After some time appearing at a number of festivals, Cormier became the mandolin player for the famous bluegrass-gospel group The Sullivan Family. He spent a number of years touring with the group, and with other major artists. In 1997, Cormier, all grown-up, finally finished a sophomore offering, Another Morning, for his fans. The award-winning recording was followed by a third full-length album, Heart & Soul. Along the way to making a name for himself, Cormier has performed with countless artists, the list reading something like a who's who in music, including Alan Jackson, Marty Stuart, Bill Monroe, Waylon Jennings, Travis Tritt, Vince Gill, Kitty Wells, and many others. If his musical career had crashed to an end with the start of the new millennium, Cormier would still have touched enough parts of the music world to ensure that his legacy lasted long after.

His latest album The Chance, is a collection of 12 original songs and two instrumentals that has been almost two years in the making. It includes the viral hit "Hometown Battlefield" and a tribute to Stompin' Tom Connor's "House of Plywood" and harkens back to the production and grassroots feel of J.P.'s best selling album, Another Morning.