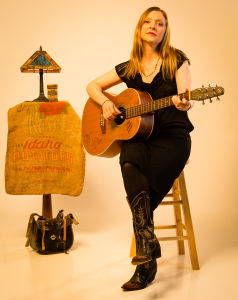 Honesty, confidence, and respect permeate Eilen Jewell’s music, dating back to her self-released Boundary County album in 2006. Since then, the Boise native has recorded five studio albums for Signature Sounds with her road-tested touring band, and two more as a member of the Boston-based gospel-charged Sacred Shakers, which includes that well-oiled band at its core. Her latest, Sundown Over Ghost Town, is a masterful culmination of Jewell’s work to date, and rolls out May 26.

As hard as it is to categorize Jewell’s music—terms like alt-country, roots-rock, country-noir, and Americana get used a lot—it’s even harder not to become thoroughly enraptured by the singer/songwriter’s powerful versatility, musical stories, and images. And that gorgeous voice makes you feel like she’s singing just for you, out on the breezy back porch or by a crackling campfire. She does so much, so well.

A few examples: Butcher Holler, Jewell’s acclaimed 2010 tribute to Loretta Lynn, underscores her love for tough traditional country music, coal miner’s daughter style, while her electrifying cover of “Shakin’ All Over,” originally a 1960 chart-topping British hit for Johnny Kidd and the Pirates, was one of the surprise highlights of 2009’s Sea of Tears. Propelled by Jerry Miller’s shimmering guitar dazzle, the song remains a live showstopper where hints of ’60s surf instrumentals and “Paint It, Black” are deftly thrown in for good measure. On 2011’s Queen of the Minor Key, featuring guest appearances from the likes of Big Sandy and Zoe Muth, Jewell penned all the songs. One of its radio favorites is “Warning Signs,” with references to a black widow, a rattlesnake, and a beady-eyed raven. Jewell calls the song “creepy.” The Boston Globe called Minor Key, “emotionally raw and riveting,” and an NPR commentator declared, “She’s got a sweet and clear voice with a killer instinct lurking beneath the shiny surface.”

Four years after the release of Minor Key, Jewell and her tighter-than-ever band—which besides guitarist Miller is filled out by the longstanding ace rhythm section of drummer Jason Beek (Jewell’s husband, who sports the glow of a young Levon Helm) and upright bassist Johnny Sciascia—make their eagerly awaited return with Sundown Over Ghost Town. Rich with cinematic visions, elegant sweet and smoky vocals, and hauntingly autobiographical songs, Sundown is bursting with stellar performances and is likely her most personal, fully realized album yet. And that’s saying a lot! The record, with all its songs penned by Jewell, is a poignant, ever-so-flavorful reflection of her return to Boise after nearly a decade in the Northeast.

“The way we approached recording this album was pretty consistent with our previous albums,” explains the singer, “in that my core band and I recorded together in a live style. We were our own producers, and we brought in a few guests to lend some extra layers.  The main difference is that everything was done in Idaho, and our guests were all local to this area. We tried not to let the long break influence anything. I wanted this album to stand on its own.”

And stand on its own, it does. Magnificently.