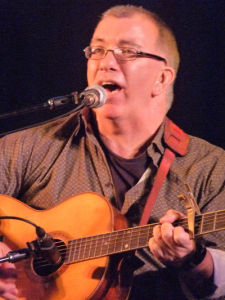 Called Canada’s finest singer-songwriter by one of the most respected and lauded music journalists of the last 50 years, James Keelaghan is an artist who has proven to be a man for all seasons.As the calendar pages have turned, for almost a quarter of a century now, this poet laureate of the folk and roots music world has gone about his work with a combination of passion, intent and intensity, and curiosity.

Fusing his insatiable appetite for finding the next unique storyline Keelaghan also forges his pieces with brilliantly defined craftsmanship and a monogrammed artistic vision, making him one of the most distinctive and readily identifiable voices of not only the Canadian scene, but as a member of the international singer-songwriter community.

Armed with a songbook that has enlightened and enthralled, and been embraced, by audiences around the world, Keelaghan’s life as an artist is one that is a perpetual journey on so many levels.

Most importantly it’s a journey that has invited fans of literate and layered songwriting to be a part of his artistic expeditions, some that weave their way through marvelously etched stories of a historical nature with underlying universal themes , and others that mine the depths of the soul and the emotional trails of human relations.¨His masterful story telling, over the course of nine recordings, has been part of the bedrock of his success, earning Keelaghan his share of nominations and awards, and acclaim from  Australia to Scandinavia.The necessity to write has always been a double-edged sword.”

“I’ve always had the urge to write.  Some things weren’t being said in the way I wanted to say them. Then there are the different sides of what I write about. The narrative writing, the historical material, as well as the personal, where you have to take responsibility for what you are saying,” says the Calgary native who has been calling Winnipeg home for the past few years.A disciplined visionary, Keelaghan’s aces have long been a love of language, and history, as he earned a history  degree years ago, his skills as a thespian that he acquired at an early age, that explain his ability to make an immediate connection with audiences in a live setting, and an ear for a memorable melody, and harmonies that make those melodies glisten.

“I’m good for 80 or so books a year, mostly history, non-fiction, but inspiration can come in many forms, I’m always on the lookout for a good story or idea. My sister told me the story that became Kiri’s Piano. It was such an image,” says Keelaghan that visits a dark chapter in Canadian history, Japanese interment camps in the Second World War. Not only does his deep catalogue include timeless originals like Fires of Calais, Cold Missouri Waters, Jenny Bryce, Hillcrest Mine, and Kiri’s Piano.  Keelaghan is also a possessive interpreter of outside material, a fine example being his gripping take on Gordon Lightfoot’s epic Canadian Railroad Trilogy on the Lighfoot Tribute disc Beautiful. There are a number of illustrations of his interpretive skills on his 2006 recording A Few Simple Verses. The closing tune on that spellbinding set, My Blood written with Jez Lowe, is one of many examples in Keelaghan’s career, where he has invited collaboration into his creative process.

“I was at the Celtic Colors Festival in 2008 and the producers locked six of us in a house for a week, and the company included Dave Gunning, David Francey, and Rose Cousins, it was an amazing experience. We had to come up with enough material for a show at the end of it.“To go along with a lifelong accumulation of influences, there have been these opportunities to work with equals, whether if be Oliver Schroer, Hugh McMillan, or Oscar Lopez. The sparks of collaboration, batting melodies back and forth, whatever, have produced some wonderful results,” says the artist who ties it all together with a powerful voice, delivery, and a commanding presence where he finds a balance between examining the lighter and heavier sides of life.

For Keelaghan staying at the top of his game comes down to a very clear rule, “never stop accumulating.”

“I want my audiences to know that I am open enough to try new things and push their bounds.”

It was Dave Marsh, the award-winning American music critic and historian who not so long ago stated that James Keelaghan is “Canada’s finest songwriter,” and those few but powerful words of praise say it all about an artist who continues to set the bar at a lofty height.