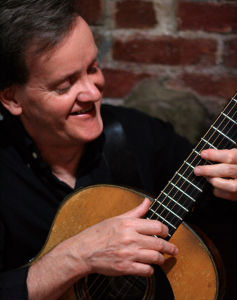 In July 1971, 18 year old Roy Forbes left his northern B.C. hometown of Dawson Creek for the bright lights of Vancouver. His songwriting, singing and guitar playing landed him immediate local attention with a late 1971 headline-making appearance at Vancouver’s Queen Elizabeth Theatre, just one of the highlights of his first few months in the big city.

Roy and his trusty Gurian guitar have toured extensively in Canada and the US over these past three decades. From the early days of small coffee houses and opening act slots with artists like John Lee Hooker, Supertramp, The Earl Scruggs Revue and Santana to eventually selling out his own shows and headlining most of the major Folk Music festivals in Canada, Roy has developed into one of Canada’s best loved acoustic performers.

Through the years Roy has made a bunch of solo albums (including one for US giant Elektra) plus two with UHF (the ‘once-in-a-while’ group he shares with Shari Ulrich and Bill Henderson), as well as a Christmas album with Connie Kaldor. The first, 'Kid Full Of Dreams', received a Juno nomination in 1976 while 1998’s 'Crazy Old Moon', received a 1999 Juno nomination and a 1999 West Coast Music Award, one of several WCMAs Roy has received over the years.

In the late 80s, feeling a need to do more than just tour, Roy turned his hand to more diverse musical activities. He produced other artists like Connie Kaldor, Mark Perry, Cindy Church & The Great Western Orchestra, Jo Whitley, Susan Crowe, and most recently, Blu Hopkins. Roy did his first film score in the early 90s (Nettie Wild’s 'Blockade') and continues to work in that field – his most recent soundtrack being the CBC TV documentary Stand Up Samurais.

His huge and eclectic record collection came in handy when Roy taped his semi-regular and popular Snap Crackle Pop show for CBC Radio. And, as of April 2006, Roy now does a weekly radio show for Alberta’s mighty CKUA Radio Network – Roy’s Record Room.

Roy gives back to his community by participating as a resource leader at songwriting workshops across Canada, an offshoot of his work with the Songwriters Association of Canada. Roy sat on the board of that organization for eight years.

In June, 2007, Northern Lights College gave Roy an honourary arts degree, in recognition of his work over the past three and a half decades. As well, the City of Dawson Creek named a street in his honour – Roy Forbes Drive.

Excerpts from a recent Vancouver Sun article by Francois Marchand ...

For the past seven months, Roy Forbes has been living with a dark secret, one he has kept away from his fans and the media: The veteran B.C. singer-songwriter lost his vision following an accident at his home in December. “Ruptured orb, emergency surgery, immediate repair, cornea transplant — from late December until June there were three surgeries. It took them until February to tell if my retina had detached. It didn’t — it’s still attached. I’ve spent a lot of time in the past 25 years at the eye care centre, let’s put it that way.”

Forbes had already lost one eye, his right, due to glaucoma when he was six years old. It forced him to wear a glass eye. His left eye had been a source of concern since 1991, when that eye’s retina first detached. It had been deteriorating ever since. The accident in December was the final blow. ﻿“In early June, we basically called it: Just a tiny bit of vision in the lower left (of the left eye), but nothing to write home about. I’m legally blind, basically.”