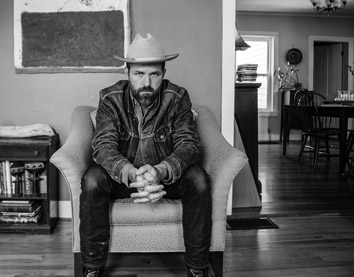 One of the finest songwriters of his generation, Jeffrey Foucault has taken, in his own words, ‘the small roads;’ building a brick and mortar independent international touring career of ten studio albums, countless miles and critical accolades. He’s been lauded for stark, literate songs that are as wide open as the landscape of his native Midwest (The New Yorker) and described as Quietly brilliant (The Irish Times), while catching the ear of everyone from Greil Marcus to Don Henley (who regularly covers Foucault in his live set), to Van Dyke Parks (who offered to play on Foucault’s 2011 offering, Horse Latitudes, after catching a live radio interview). Salt as Wolves is a line from Othello describing boldness; a fitting title to frame a record of blues played bold and loosely, without rehearsal or cant. With his fifth collection of original songs Foucault stakes out and enlarges the ground he’s been working diligently all the new century, quietly building a deep, resonant catalog of songs about about love, memory, god, desire, wilderness and loss. Salt As Wolves gives us Jeffrey Foucault at the height of his powers, fronting an all-star band, turning the wheel of American music.

Jeffrey Foucault was 17 when he learned to play all the songs on John Prine's eponymous debut on his father's mail-order guitar, spending long evenings in his bedroom spinning piles of old records on a hand-me-down turntable, lifting the needle to transcribe every line of ‘Desolation Row’. At 19 he stole a copy of Townes Van Zandt: Live and Obscure from a friend, and a few years later, having quit school to work as a farm-hand and house-carpenter Foucault began writing the songs that became his first record (2001’s Miles From the Lightning). Since that release he’s been everything from solo country-blues troubadour to frontman for a six-piece rock 'n' roll band, along the way compiling a discography remarkable for its visceral power and complex poetics. Yet it wasn’t until he paired with former Morphine drummer Billy Conway that the final piece fell into place and Foucault found the Luther Perkins to his Johnny Cash: the truly sympathetic collaborator to both frame and fire his terse brand of minimalist Americana.

Since 2013 Foucault and Conway have toured across the United States and overseas together, refining a primal, stripped-down stage show: two men, two chairs; a Sears Silvertone electric tuned low and played through a 5-watt amp; a suitcase kick drum, a low-boy cymbal, a snare drum. The pair play only what they can carry into the club alone in one trip, and cover all the territory from blues and country, to rock 'n' roll and folk with a laconic ferocity and timeless cool. Their dynamic partnership - as nimble as it is sonically powerful - is the bedrock from which Salt As Wolves builds an eerie and muscular existential blues.

Salt As Wolves is not an exploration but a statement: here is the man in full, extending his musical reach in the toughness and precision of his electric guitar work (as he distills a modal, hypnotic electric blues reminiscent of John Lee Hooker and Jessie Mae Hemphill), in the mature range and depth of his singing, and in the intimacy and vulnerability of his songwriting. Cut live to tape in just three days in rural Minnesota, Salt As Wolves moves like a vintage Chess record, with an openness and dimensionality that beckons the listener further in. In language richly simple and profound, Foucault plumbs the implications of a life spent looking for the Real, in a series of epistolary songs that locate the transcendent moment or its seeking, the love we don’t understand, the thing that is lost when a great spirit dies. At the heart of the record the song ‘Slow Talker’ frames the whole in its refrain: ‘There’s one note / If you can play it / There’s one word / If you can say it / There’s one prayer / If you can pray it / And each one is the same.

“The music of Wisconsin native Foucault is the kind so many aspire to but never attain: beat-up troubadour folk whittled to dolorous perfection…” - Uncut.

“Swirls of dust… occasional gusts of prairie wind… literate songs and an ability to produce raw power in a stripped-down way.” - Elmore Magazine.

“One of the preeminent singer-songwriters of his generation.” - La Crosse Tribune.

“A country plea, a blues reach for facts beyond sound, the sense of immediate doom that only a slide guitar can make in its hesitations, its sense of suspension that seem to hold everything a step behind where it ought to be... scary in the bend of the first note” - Greil Marcus.