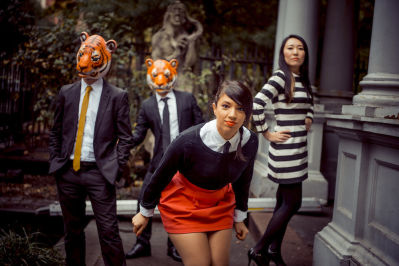 Greek-born singer, accordionist, film scorer and composer Magda Giannikou is a musical chameleon who breezes through everything from French-Brazilian hybrids to collaborations with the Kronos Quartet and Snarky Puppy, Greek folk tunes and Columbian cumbia. But in each style or language she and her energetic and incredibly tight-knit New York-based band excel and mesmerize audiences with their brilliantly coloured performances. Their songs, sung in French, with forays into six other languages, hearken back to the golden age of Brazilian bossa, the best of cinematic arranging, and the lush chic of vintage French pop, all while drawing on the band’s global background.

Magda Giannikou is a pianist, an accordionist, a singer, a composer, an orchestrator, a songwriter, a music producer, an aspiring dancer and a very good chef. Born and raised in Athens, Greece, she very soon discovered that music was the coolest thing on earth and began her musical training in classical music and jazz. After having taught elementary schools all over Greece, written music for TV and theatre in her native Athens, and having participated in more than fifty children’s productions, the forces of nature took her to Boston, where she studied film music at the legendary Berklee College of Music.

A winner of multiple awards, such as the Georges Delerue Award for achievement in Film Scoring, and the BMI Film Scholarship, she moved to New York just after her studies. Bedazzled by the wonderful world of live jazz and world music, she took some time and made songwriting, singing, playing accordion and gigging a significant part of her life.

An immediate result was the formation of Banda Magda, a blend of French lyrics, Latin-American rhythms and jazz improvisation that encompasses all that wonderful and diverse stimuli that the city of New York can induce in a musician. Banda Magda has obtained an enthusiastic audience throughout the globe with performances in the US, France, Luxemburg, Greece, Colombia and Canada. The band is part of Carnegie Hall’s Musical Explorers Series, and have/are scheduled to perform at discerning venues and festivals such as Celebrate Brooklyn, Joe’s Pub, The Jefferson Center, The Kennedy Center, Webster Hall, Iriving Plaza, Burlington Discovery Jazz Fest, Minneapolis World Fest, Chicago World Fest, Festival Jazz Al Parque as well Magda's participation in Snarky Puppy's Grammy Award-winning album Family Dinner Vol. 1.

After taking a short break from her NY life to attend the Sundance Composer’s Lab 2009, and under the inspiring guidance of Lab advisors such as George S.Clinton, Walter Murch, Osvaldo Golijov and Harry Gregson-Williams, the spark of her love affair with music-locked-into-picture was reinforced. Since then she has worked as orchestrator for the Spanish 3D animation feature La Tropa del Trapo with composer Zeltia Montes (Jerry Goldsmith Award), written music for iZLER (World Soundtrack's Discovery of the Year Award) and Curt Schneider for Natural Selection directed by Robbie Pickering, Edet Belzberg’s Watchers of the Sky and Louis C.K’s Louie. She recently wrote a piece for string quartet, percussion and laterna for the renowned Kronos Quartet celebrating their 40th anniversary at Lincoln Center in New York.

Magda currently lives in New York, produces artists, writes string arrangements, composes songs, practices the accordion, tours with Banda Magda and makes music in any way possible. Amidst all that, she still manages to dance, and occasionally cook as well.

“An artist who fires on all artistic cylinders.” – NPR