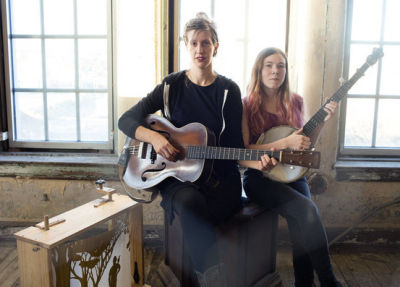 A collaboration between Anna Roberts-Gevalt and Elizabeth Laprelle, the pair’s growing acclaim springs from a shared quartet of talents: Both are historians, storytellers, visual artists, and gifted, intuitive musicians—in combination, a groundbreaking approach.
​
Inspired by the richness and tradition of the music, Anna & Elizabeth gather songs and stories from archives and visits with elders. They bring these songs to life in performance with sparse, atmospheric arrangements using guitar, banjo, fiddle, and the uncanny blend of their voices in close harmony. They accompany their songs with stories—of the lyrics, of the singer, of the quest to learn the song—and they illustrate them in mesmerizing fashion. The two revive the old scrolling picture show, dubbed  “crankies”—intricate picture-scrolls illustrating the old songs they sing, which they create in tandem with papercuts, shadow puppets, prints, and embroidered fabric.

Anna & Elizabeth met in 2011, and their work has brought them to stages across the world, including the Atlanta Museum of Modern Art; folk festivals in Brooklyn, the Yukon, Chicago, Maine, and Uzbekistan; residencies at universities; summer traditional music schools; and small theaters and folk clubs across the U.S. and U.K.

Their second album, which features Grammy nominee and legendary folk singer Alice Gerrard, was released March 2015 on Free Dirt Records. It has been featured on Vice’s Noisey, the Huffington Post, No Depression, and NPR Music’s Tiny Desk Concert series.

This winter, Anna & Elizabeth are beginning a new cycle of work, inspired by ballad singers of the 1930s and 1940s in Vermont and Virginia—the states where they grew up. Spending time in archives, with the families of these singers, and with a director, Anna & Elizabeth with explore connections between place and tradition to develop a new show, a new set of crankies, and a new album inspired by these ballads.

ELIZABETH LAPRELLE, 28, has pursued her interest in mountain ballads for over a decade. Since the release of her debut album at age 16, she’s been hailed as one of the most dedicated students of the traditional unaccompanied style of her generation. The student of master singer Ginny Hawker and National Heritage Fellow Sheila Kay Adams, Elizabeth was the first recipient of the Henry Reed Award from the Library of Congress at age 16, and won the 2012 Mike Seeger Award at Folk Alliance International. She has released three solo ballad albums, and was called “the best young Appalachian ballad singer to emerge in recent memory” by UK’s fRoots Magazine. She lives on a farm in Rural Retreat, Virginia.

ANNA ROBERTS-GEVALT, 28 is a versatile and passionate multi-instrumentalist. Classically trained on the violin in Vermont, she fell in love with the sound of banjo in college, moved to the mountains, and learned with master musicians in Kentucky, Virginia, and North Carolina. She is a blue-ribbon fiddler and banjo player (WV State Folk Fest, Kentucky Fiddle Contest); was awarded the Berea Archive Fellowship for a series of biographies of female fiddlers; served three years as artistic director of Kentucky’s traditional music institute, the Cowan Creek Mountain Music School; was a 2014 fellow in the State Department sponsored international music residency OneBeat; and is an in-demand video artist, collaborating with Kristin Andreassen, Cuddle Magic, Rachel Ries and Ben Sollee. She lives in Baltimore, Maryland.