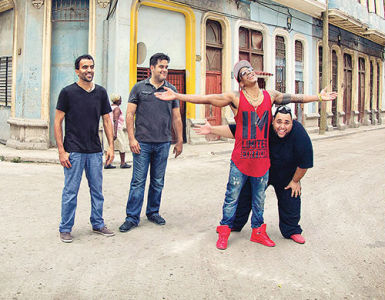 Please note that this is primarily a Capilano University production. Tickets are purchased through them. Regular Rogue Folk Club discounts including the Parcel O'Rogues are not available.

Pedro Pablo “Pedrito” Martinez was born in Havana, Cuba, Sept 12, 1973. Having settled in New York City in the fall of 1998, by 2000, he had been awarded the Thelonius Monk Award for Afro-Latin Hand Percussion and was featured in the documentary film, Calle 54.

Pedrito has recorded or performed with Wynton Marsalis, Paul Simon, Paquito D’Rivera, Bruce Springsteen, and Sting and has contributed, as a percussionist and vocalist, to over 50 albums. Mr. Martinez was also a founding member of the highly successful, Afro-Cuban/Afro-Beat band Yerba Buena, with which he recorded two albums and toured the world.

Pedrito’s career as a leader began in 2005 with the formation in NYC of The Pedrito Martinez Group. The group’s Grammy-nominated first album was released October, 2013 and was chosen among NPR’s Favorite Albums of 2013 and The Boston Globe Critics Top Ten Albums of 2013. Habana Dreams, PMG’s second album, was released in June 2016. Guests include, Ruben Blades, Isaac Delgado, Wynton Marsalis, Descemer Bueno, Roman Diaz, Angelique Kidjo, and Telmary Diaz. Accolades for Habana Dreams include #1 Latin Jazz Album in NPR’s Jazz Critics Top Jazz Albums for 2016 and being named among Boston Globe World Music Albums for 2016.

At his regular gig in Midtown Manhattan he and his extraordinarily tight and creative group show off their talents and fresh and catchy grooves to dedicated fans including the likes of Roger Waters and Wynton Marsalis. A master of Afro-Cuban folkloric music and the batá drum he is also the world’s first-call rumbero (master of the rumba) —playing, singing, and dancing with dozens of groups and contributing to or appearing in films, including Calle 54 and Chico and Rita. Martinez and his band pack a powerful punch with guaguancó, timba, R&B, gospel, and flamenco grooves that will have you shimmying in the aisles.

“Pedrito is a genius…working with him has been a revelation to me.” – Wynton Marsalis

“The Pedrito Martinez Group is writing a new chapter in Cuban music history… The more you listen, the more you realize Pedrito is, almost impossibly, both a cosmopolitan entertainer and an authentic folklorist.” – NPR