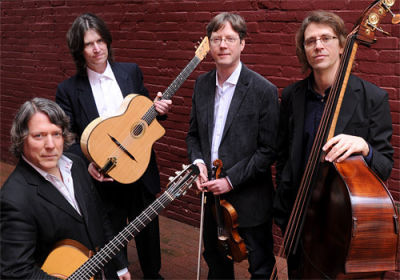 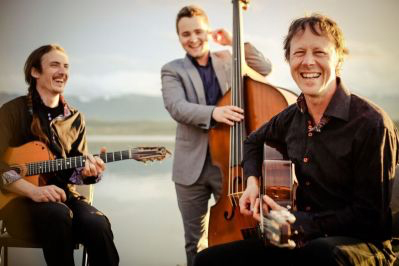 Send Email
The Mayor of Vancouver has proclaimed the month of May as ROGUE FOLK MONTH! There will be a special presentation ﻿by City Councillor Heather Deal to commemorate this before the concert begins, at 7:50pm.

Van Django's music is well-rooted in the gypsy jazz of 1930's Paris France, but beyond that it's all pure blue-skying; flights of dazzling fancy, driving rhythms and boundless creativity featuring original compositions and arrangements including humorous mash-ups that showcase their eclectic influences in full regalia.

Since the group's formation in 1998, they have toured extensively in Canada as well as international forays to the United States, Europe and China. The group has had repeat performances at Djangofest Northwest (DFNW) on Whidbey Island, 2008, 2010 and 2016

They have released 3 CD's - Tiptoe Trip, Waltz in the Shape of a Tree and a Christmas CD with special guests entitled Cool Yule. Their CD's have been well received and played on many radio stations at home and abroad including CBC, RDI, Espace Musique, NPR and Lyric FM in Ireland.

"In an increasingly crowded niche, Van Django is a standout act. With a clever mix of contemporary standards, classical ditties, rock homages and solid originals they effortlessly whip the audience into a joyful frenzy. Attending a Van Django concert is the most fun you can have sitting down with your clothes on." - Nick Lehr, Dangofest Director

“Van Django tosses off jaw-dropping technical licks with effortless ease, but above all, they entertain hugely, with every bar of every tune — tried and true or keenly original.” - Jurgen Goethe, former host of Disc Drive on CBC 2

"Van Django can deliver acoustic power chords with the lustrous tone of a classical string ensemble while staying fully stoked on the spirit of the Quintette of the Hot Club of France."- Michael Juk, Westcoast Music on CBC 2

Marc Atkinson is one of Canada's finest Juno-nominated, Western Canadian award-winning musicians. He is the leader and composer of the internationally renowned Marc Atkinson Trio (and co-founder, composer and performer in the acclaimed, The Bills). The music of this virtuosic group is melodically captivating, sensually charged and ferociously, technically awe-inspiring. Embracing a lifetime of musical influences, Marc and the Trio have just released their fourth CD, The Marc Atkinson Trio IV, praised as the finest yet. The compositions on this CD are punchy, driving and rhythmically inventive. The Trio, formed in 2000, has toured North America, England and Europe and has received standing ovations everywhere they perform from the Montreal Jazz Festival to the Vancouver International Folk Festival to DjangoFest Northwest.

The Marc Atkinson Trio IV pushes the boundaries of this instrumental group even further than the first three CDs. It is a technically demanding, melodic and rhythmically pulsing 50 minutes of music. The new CD includes 11 Marc Atkinson original compositions and one impressive rearrangement of a Russian Rag. The compositions glide seamlessly from unusual beauty, to raucous rhythm. If you are a lover of the guitar, instrumental music or just music, you will love this new recording.

Marc Atkinson, a multi-instrumentalist, composer, arranger and producer, is one of Canada's most talented musicians. His catchy compositions, found on the self-titled CDs I, II, III and now IV take guitar beyond the usual repertoire and sound. The tunes have a fiery but elegant guitar style, infused with a catchy blend of influences. All this while still maintaining the laidback humour and casual 'good time feel' of Canada's West Coast. Atkinson's picking has been described as flawless, surprise-filled, sizzling and supremely melodic. His music is original, complex and challenging in its conception and delivery but remains accessible and absorbing. The music of the Marc Atkinson Trio good-naturedly welcomes all listeners aboard for an intriguing, exhilarating and unforgettable ride.

Joining Marc (lead guitar) are Brett Martens (rhythm guitar) and Scott White (bass), along with special guests Cam Wilson (violin) and Robin Layne (percussion). The music of this fine group welcomes all listeners aboard for an intriguing, exhilarating and unforgettable ride.

Put this leader and his trio solidly in the top ten of the world's working string trios (Rosenberg Trio, Trio Balkan Strings, Bell/Meyer/Bush, Austria's Triology and Iceland's Guitar Islancio among them) and there's a pantheon of pure playful --and tuneful -- pleasure. - Jurgen Goethe CBC (Disc Drive)

"I'd compare it to the music David Grisman made with the late Jerry Garcia." - Robert Reid - Guelph Mercury

"Atkinson backs up his jaw-dropping technique with real -- and really good -- music. Check the Spanish-sounding, rapid-fire arpeggios opening "Bright Eyed Waltz" as it transforms into a fun, twirling turn. "Walker" is absolutely dazzling. Expertly backed by Chris Frye on guitar and Joey Smith on bass, this is exuberantly fresh and sparkling, a wonderful gem."  - John P. Mclaughlin - The Vancouver Province

"...punching out lively tunes with technical prowess, yet still interspersed with episodes of emotionally-charged improv . . . he darts up and down the length of the fret-board, plucking out a barrage of well-timed notes with amazing dexterity." - Victoria News

"The release of the Marc Atkinson Trio's aptly-titled fourth CD, IV, is cause for celebration." - Joseph Blake Times Colonist

Please note that the admission price for this concert includes a $2 Venue Improvement Fee that we are required by the St. James Square to collect from every patron. Starting in September 2016, the proceeds from this temporary fee will be used for construction projects such as ventilation, flooring and washrooms that will make the hall a nicer place for you to visit in the future. If you wish, you can make a secure donation by clicking on the big blue button at the bottom of the web page located at www.sjcommunitysquare.org. For information on donating by phone or post, please contact the St. James Square office at 604-739-9373.