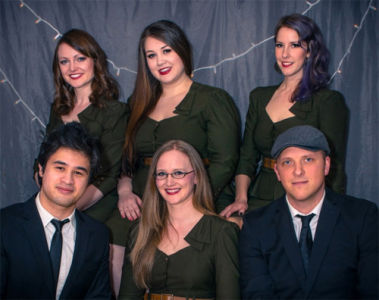 Company B Jazz Band (BC)

Company B Jazz Band is Vancouver’s foremost vintage jazz harmony group.  A 6-piece ensemble featuring a female vocal trio (à la the Andrews and Boswell Sisters) framed by clarinet/sax, guitar, and upright bass, “the Company” has been entertaining the masses since 2007 with their tight blend, driving rhythms, creative arrangements, sharp image, and charming wit.  To date, the group has released 3 albums and performed all over their native British Columbia as well as the USA and China.

The members of Company B Jazz Band met in the Jazz Studies Program at Capilano University, where they all gained a firm foundational training in modern jazz.  Interested in learning more about what come before, the friends happened upon recordings of first the Andrews Sisters and then the Boswell Sisters.  It was love at first listen, and Company B Jazz Band set out on a mission to recreate the sound and spirit of this wonderful era of swinging jazz music, and add their own musical personalities to the mix as well.  The rest, as they say, is history!

After more than 7 years performing together, Company B Jazz Band has become a very popular act in Greater Vancouver’s thriving swing dance community, and has delighted audiences from all walks of life in concert venues and music festivals all over the Pacific Northwest, most notably in Vancouver’s Chan Centre for the Performing Arts, the TD Vancouver International Jazz Festival (2008, 2010, 2011, 2012, 2014, 2015), and the Sacramento Jazz Festival in California.  The group enjoys frequent airplay on CBC Radio 1 and 2, having been featured on Hot Air, Canada Live, Stuart McLean’s Vinyl Café, and in live broadcasts on The Early Edition for British Columbia Food Bank Day in 2012, 2013, and 2014 alongside Chor Leoni Men’s Choir and Maestro Bramwell Tovey.  In October 2014, Company B Jazz Band traveled to New Orleans to perform in The Boswell Sisters Revue, a concert organized by the granddaughter of Vet Boswell featuring a hand-picked selection of 3-part harmony jazz groups from all over the world.  The event was broadcast live via the internet and was covered by the Wall Street Journal, in which Company B was honoured to receive a mention.  Most recently, Company B Jazz Band completed an 11-date tour in China for the 2015 Jiangsu Jazz & World Music Festival. To date, Company B Jazz Band has released 3 full-length albums - Company B Jazz Band (2009), Rock & Roll (2011 - named for a 1930s ditty about being out in a boat), and A Company B Christmas (2013). A new CD will be out soon.

Commissioned by the Pender Harbour Jazz Festival, the Company B Big Band is a 12-piece group in the style of dance bands from the 1930s and '40s. Vancouver's Company B Jazz Band, normally a 6-piece group featuring a female vocal trio, jumped at the opportunity to double their numbers and perform the arrangements of such big bands as the Duke Ellington Orchestra and the Tommy Dorsey Orchestra.

​The Josh Roberts Orchestra was founded as an eight-piece in 2014 for Vancouver's local Frankie 100 celebrations and expanded into a ten-piece, hard-swinging big band in 2016 for Lindy Bout X. The band features the music of Jimmie Lunceford, Count Basie, Chick Webb, and many other greats of the thirties and forties.

When the two groups discovered their shared love of big band music and essentially identical instrumentation, it was undeniable that they should join forces! With the polished skills of an all-star cast of band members, the end result is a repertoire stacked with irresistible high energy music that sends you right back to the Swing era dance halls.

"This was one of the most fun evenings we have produced." - Ray Nyuli, Entertainment Management, Kamloops