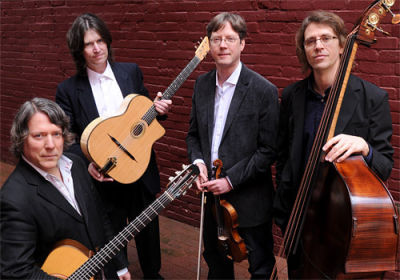 They have released 3 CDs Tiptoe Trip, Waltz in the Shape of a Tree and a Christmas themed outing with special guests LJ Mountenay and Keith Bennett titled Cool Yule. Their CDs have been well received and played on many radio stations at home and abroad including; CBC, RDI, Espace Musique, NPR and Lyric FM in Ireland. The group has just finished a new CD Hotel Europe, and copies should be available at the concert!

The Lawless Hot Club is the new Gypsy jazz group on the block made up of several musicians from disparate bands. Guitarist Michael Dunn has been a fixture in the Gypsy jazz world in Vancouver from its beginnings in the late sixties. His group the Hot Club of Mars has been part of April in Paris since the very beginning! Don Ogilvie, whose guitar playing mastery is firmly rooted in the Gypsy style, has played in more groups than anyone can count. He has partnered with Michael on and off for just about 40 years. They recorded a guitar duet CD in 2002. Their newest discovery is Edgar Bridwell. Edgar played with the late Ray Condo and his repertoire includes anything from Mendelssohn to Grappelli and whatever is between. Joe Bourchier a journeyman bassist can be found playing all over the city in many bands. And chanteuse Eleanore Dunn, whose repertoire encompasses music from the American songbook, has what people have described as an “old fashioned voice” ideally suited to the music of the time. The group will feature some original Django pieces seldom heard as well as some surprises.