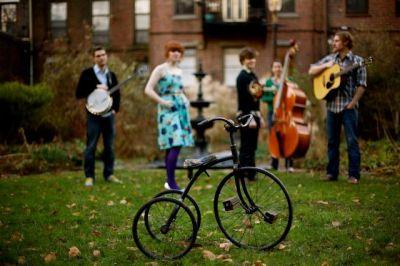 You could loosely categorise Joy Kills Sorrow as Americana in that they merge influences from bluegrass and folk, but it's all mixed in with hints of Celtic, jazz, indie rock and more to create a sound that is as refreshingly unique as it is familiar - it certainly breaks with tradition, but in the same breath has more than a nod to the music that has gone before it. The Boston-based five piece are obviously all well versed in traditional American music and have respect for the history of the material, but they also have an equal love of contemporary music and on this album it all comes together on this fantastic eleven track album.

They released a debut album a couple of years ago, but several band members later, Joy Kills Sorrow have settled on a line-up of some of the country's finest young talent with a host of awards and accolades behind them that range from national flat picking champion to 2008 Canadian Folk Awards Young Performer of the year, to a winner of the John Lennon Songwriting Contest. On paper they look like they should be something special, but the resulting collection of songs is even better!

Vocalist Emma Beaton (from Vancouver Island) has a naturally soulful voice that is as comfortable with a band backing her as it is acapella; and Jacob Jolliff is as fine and exciting mandolin player as you could wish to hear (and that includes the legends Grisman & Marshall). Beaton & Jolliff with the banjo of Wesley Corbett provide much of the colour on the disc, but the guitar work of Matthew Arcara and bass of Bridget Kearney are vitally important to the overall quality and much of the overall shape and sound of Joy Kills Sorrow comes from the songwriting style and overall arrangements of Kearney.

The quintet have just released a superb CD, Darkness Sure Becomes This City (Signature Sounds) and we saw them showcasing in Memphis at the Folk Alliance conference last month. What a show they put on! Superb musicianship, and the breathtaking voice of Emma Beaton. Wow! Don't miss this concert if you love music with roots - and believe in its very bright future.