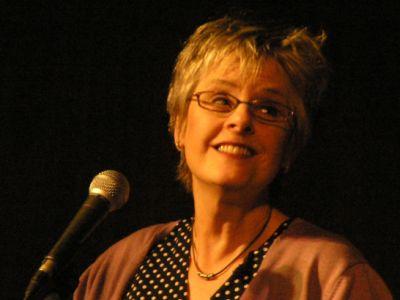 Born in San Rafael, California multi-instrumentalist and singer / songwriter Shari Ulrich moved to Vancouver in the early 1970's in response to the Vietnam War. After stints of backpacking and cycling around Canada and the US, (always with a guitar and a flute on her back) her search for her place and path in the world included a stint performing with her older brother and sister with the San Francisco Free Theatre, finally discovering that music was IT.

In all, she has released 17 albums as a solo artist and as part of various groups -- which have garnered her 2 Juno Awards, several award nominations, and an induction into the British Columbia Entertainment Hall of Fame. Shari first hit the stage as one-third of the infamous Pied Pumkin String Ensemble. The Pumkins -- Ulrich, Joe Mock and Rick Scott embodied joie de vivre and intellectual whimsy and became the foundation of British Columbian music for an entire generation. Die-hard Pumkin fans recall Ulrich"s violin, mandolin, flute, dulcimer, guitar, and saxophone playing as well as her incomparable voice - a formidable balance to the wacky and unique songwriting and performance personalities of her cohorts.

Big changes came in '76 when Shari was hired to tour with West Coast folk artist Valdy as part of his backing group, The Hometown Band. When the Hometown Band dissolved in '78, Shari embarked on a solo and songwriting career - firstly on A&M and later releasing her albums independently. She pursued a wealth of new challenges: TV hosting, (including "Futurescan" with David Suzuki), writing and hosting BCTV"s "Inside Trax", writing and producing pieces for Sesame Street, scoring themes and documentaries for CBC, Life, and the Knowledge Networks, as well as the National Film Board; and even musical theatre ("Tapestry" and "Baby Boomer Blues"). She also became a role model for women after surviving near-fatal assault and speaking publicly about the experience.

1989 marked the start of her collaboration with long-time friends Bill Henderson and Roy Forbes - UHF - the much praised acoustic/vocal trio with whom she continues to record and perform. Shari has also resumed touring and recording with The Pied Pumkin, since reuniting in 1997. They recently released a children"s album "Pumkids" which has won a coveted Parents Choice award in the US. She has also produced the popular Bluebird North concert series for the Songwriters Association of Canada both in Vancouver and nationally for over a decade.

Through it all Shari raised a daughter, Julia Graff, along with former husband, songwriter and visual artist David Graff. Julia, now 19 and herself an increasingly accomplished instrumentalist, has been joining her mother in her concerts on violin, guitar, piano and vocals for several years. She is currently studying psychology and music technology at McGill in Montreal. Shari is also often joined by her long time partner - jazz great Bill Runge. Ulrich's collaboration with her daughter marks an exciting chapter in her rich and varied career.