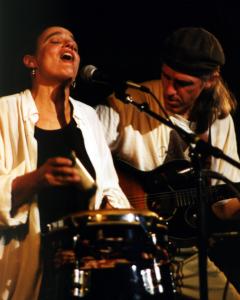 Born in northern NJ, the daughter of a big band singer, Karen Savoca's baby diary reads "20 months, knows 6 songs." She grew up singing, dancing and harmonizing around a piano, and by the age of five she was emceeing the school play.

Savoca puts her heart into a song the way a great actor throws herself into a role, charming audiences with a supple alto and a boundless range of expression. A gifted songwriter, she draws you into her world of humor and compassion, telling stories with grace and ease, as though you've been invited to her table for supper.

If she were a Native American, her name would be Sings Like Two Birds. - Greg Brown

She first met Pete Heitzman at a jam session and immediately recognized him as an ideal musical partner. Described by an Alaskan reviewer as the aurora borealis of guitar, Heitzman's transcendent playing is central to their sound. With a broad pallet of tones and textures, he paints ideal landscapes for Savoca's engaging songs. Years of leading an all-original, dance-driven band imbued the duo with the power of a larger group.

Electrifying, unique and always uplifting, these improvisational performers have the fearlessness of a high wire act working without a net. - Six String, Columbus, OH

Savoca's seventh solo release, Promise, was recorded in their 19th century church studio nestled deep in the hills of upstate NY. Promise is being lauded as her strongest collection of songs to date, hitting #1 on Alberta's CKUA chart and #25 on the Euro/Americana Chart.

There's soul in the delicious grooves and phrasing, and soul in the broader spiritual sense that floats out in her lyrical vision. - Edmonton Journal

Cleverly written and embracingly beautiful songs that have a beguiling way of changing and reconfiguring themselves like an aural kaleidoscope. - Duluth News Tribune

Karen and Pete have played 5 times at The Rogue over the years, dating back to their triumphant debut at the Vancouver Folk Festival in 1999. (Who could forget "the miracle of the shoes", when everyone near the front wanted to dance, but those at the back objected, so the wannabe dancers waved their shoes in the air to register their love of the music and let Karen and Pete that their souls - and soles - were dancing? It's been over 6 years since they last played here, when they were joined by the late Oliver Schroer on fiddle at Cap. They might be joined by a special guest like Shari Ulrich again. Who knows?

We do know it will be a stunning show, with some amazing new songs. The new CD is chock-full of powerful imagery and passionate vocals; what else would you expect from these two human dynamos?