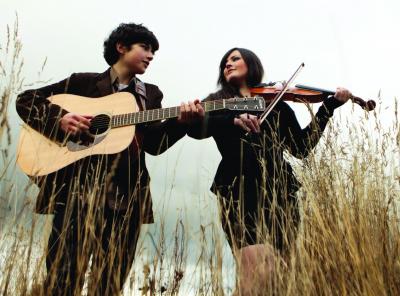 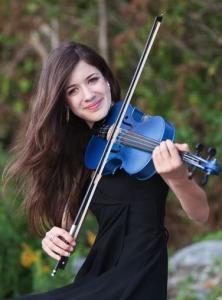 Qristina Bachand is an expressive fiddler, with a unique style that is bold & edgy. Though strongly rooted in the Celtic tradition, her versatility and interests also include Old-Time, Appalachian and contemporary folk music. Clearly at ease on stage, Qristina is a natural performer, consistently delivering a spirited performance that features her energy, enthusiasm and love of Celtic music. Qristina recently added traditional and original songs to the repertoire and is receiving rave reviews as a vocalist. Her singing is described as lovely and delicate, with a laidback sweetness. (Roots Music Canada)

Often compared to John Doyle, sixteen year old Quinn Bachand is a prodigiously gifted multi-instrumentalist who already has a reputation as one of the best Celtic guitar accompanists in the world (Ashley MacIsaac). Although Quinn plays a range of guitar styles including jazz, it is his talents in the world of Celtic music that are drawing the most attention. Quinn adds a contemporary edge to traditional Celtic music; his creative harmonies, hard-driving strumming, inventive chord voicing and powerful rhythmic effects make even the most well-worn tunes seem new and exciting. In addition to performances with sister Qristina, for the past two years Quinn has also performed with Ashley MacIsaac across Canada and Australia. An in-demand sideman, Quinn is now set to perform a series of U.S. concerts in late March with Cape Breton's fiddling sensation Natalie MacMaster.

Qristina and Quinn have performed across Canada, the U.S. and Europe at clubs, concert halls and festivals including Celtic Colours International Festival, Milwaukee Irish Fest, Kansas City Irish Fest, Speyfest, Feakle, and many more. In July/August 2012 they will be touring Europe and Canada performing at festivals including the Hebridean Celtic Festival, the Newfoundland and Labrador Folk Festival and Goderich Celtic Roots Festival.

Their second CD, Family, features a wonderful selection of Irish tunes in scintillating medleys. It's especially intriguing is they enter the realm of old-time music, which sees Quinn switch to 5 string banjo and Qristina sings as well as playing some scorchingly hot fiddle. Then there's a beautiful tune, "Lonesome Eyes," written by the late Cape Breton fiddler Jerry Holland for his son Jerry Junior. There's also a lovely song written by Scots duo Mairi Campbell and Dave Francis, but it's the selection of reels and jigs that are the focal point of the new CD. Yet again Quinn amazes with some formidable tenor banjo on "Lark In The Morning," and Qristina's sparkling fiddle playing shines throughout. Other highlights include "Music For A Found Harmonium" (the theme music for The Edge on Folk since 1989), and some cleverly "tweaked" tunes: reels into jigs, especially.

Joining Qristina and Quinn will be their Los Angeles based band mate, Zac Leger. Zac holds numerous medals on various instruments from both the U.S. and Ireland, including an All-Ireland piping medal, one of few Americans to hold this prestigious title. Zac has recorded on nearly two dozen albums and has played, recorded and performed with the likes of The Border Collies, John Whelan, Liz Carroll, Rathkeltair Tony DeMarco and world-renowned finger-style guitarist Al Petteway to name a few. He has been a member of the critically acclaimed Eileen Ivers and Immigrant Soul as well as the Irish-based show Celtic Crossroads. Since recording on Qristina and Quinn's 2011 album Family Qristina and Quinn are pleased to have Zac as their touring accompanist.

Boston fiddler Laura Cortese was originally booked to share the bill, but she has cancelled this part of her tour. Not to worry. We didn't have to look far to find a wonderful fiddler to replace her: White Rock's brilliant young musician Kierah Raymond.

Kierah has sold over 3,500 CDs in the Vancouver area and hundreds of downloads around the world, so there are a lot people that know her! She will be receiving her Teaching certification with the Royal Conservatory of Music in June, works with the South Surrey Youth Orchestra as the Concert Master and has 2 big solo fiddling parts coming up with them - this month a wonderful intercontinental fiddling suite and in June an incredible jazz fiddle suite with Miles Black. She wrote and published B.C.'s first book of all original fiddle tunes (found at every major music store in B.C.) Both of her CDs received CFMA nominations, with the latest one receiving an award from Highlander Radio for the best Jigs and Reels of 2010 and her music is regularly played on Galaxie Radio. She recently received a scholarship to attend the U of Limerick and we are only too happy to enable her to be heard by the many Celtic music fans here in Vancouver before she departs for the Emerald Isle.

Kierah will be accompanied by Doug Haynes on the Bodhran.