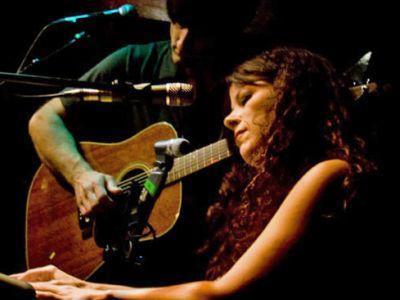 With her highly acclaimed album, Mudshow ("A Small Miracle.." Rolling Stone) Indiana's Krista Detor was established as a gifted player on the world stage. Together with partner and producer, David Weber, she's since released the follow-up album, Cover Their Eyes ("One of the best albums of the year.." Revolver) continuing to push the edges of genre while remaining close throughout to the lyrical thread that defines her work. She's reached #1 on the Euro-Americana chart and her music's been featured at the Cannes Film Festival, on NPR, PBS, the BBC, as well as countless U.S. and European National, Regional & Local radio shows. She's appeared on both U.S. and European television and collaborated on the Emmy nominated PBS Special Wilderness Plots.

Most recently, she was honoured to be chosen to be a part of the Darwin Songhouse, with 7 other songwriters in Shrewsbury England, writing for 7 days songs & completing a live CD to celebrate the 200th anniversary of the birth of Charles Darwin in his hometown. The event and subsequent concert were covered extensively by the BBC. Currently, Krista has just completed a new solo album, Chocolate Paper Suites, with guest artists Colin Linden, Moira Smiley (Voco), Mark Erelli, Malcolm Dalglish, Jason Wilbur, Dena Al-Safaar, Karine Polwart, Chris Wood and a host of other talented players, which was released in February.