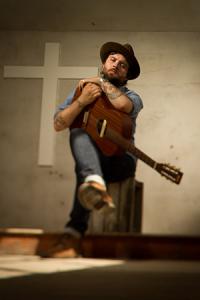 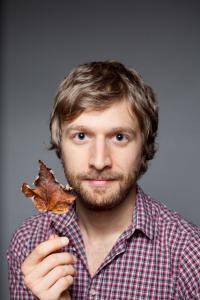 I believe that love and understanding will right the wrongs in the world, says folk-rocker Leeroy Stagger, who certainly tries to convey the sentiment on his sixth album to date, Little Victories, set for release on February 4. Released on his own label (newly minted Rebeltone Records), Little Victories showcases Stagger's penchant for evocative lyrics and inspired songwriting.

Little Victories is Stagger's most realized effort to date and he begins the album with a standout track, "Everyone's On Drugs". A haunting tune with far more than just an effortless melody and a tender vocal performance, the song tells a complex tale of substance abuse. As the song progresses, the layers unfold and revelations about the societal implications of self medication bring themselves to the forefront, demonstrating Stagger's thoughtful lyrical style. Tracks such as "Poor Little Rockstar" shine in a stark and ethereal arrangement. "I Believe in Love" (an ode to John Lennon) precedes the beautifully tragic closer "Love Will Let You Down". Produced by Stagger and Kevin Kane (Grapes of Wrath), Little Victories was recorded at Rebeltone Studios in Lethbridge, Alberta and mixed by Darryl Neudorf (Neko Case, Blue Rodeo, Jim Bryson, The Weakerthans). The album features musical guests Bob Egan (Blue Rodeo, Wilco), Romi Mayes, Daniel Lapp, Christina Zaenker and Geoff Hillhorst (Deep Dark Woods). Also on hand to helm the album were Stagger's core band, The Wildflowers: Kevin Kane (guitar), Tyson Maiko (bass) and Kyle Harmon (drums).

Born in Victoria, British Columbia and raised on a little island on the very west coast of Canada, Stagger spent most of his youth with his grandparents who exposed him to the world of country music. Developing his musical drive early on, Stagger formed his first punk rock band at age 18. Songwriting came shortly after with themes revolving around his childhood, traveling, relationships, substance abuse and the tribulations of life. Having collaborated with one of his icons, Danny Michel, Stagger found commercial success in the song, "Just in Case", which was featured twice on the television hit, Grey's Anatomy.

The life of being on the road and touring at a fast pace did not wear easily on Stagger, who at age 26, realized he had an alcohol problem that was affecting his ability to perform with the commitment and heart his songs demanded. Clean and sober since, Stagger has a strong desire to inspire young musicians that they do not have to succumb to the pitfalls of substance abuse, which can be prevalent in a musician's touring lifestyle.

Little Victories is Stagger's musical imprint for those who have faced difficulties, but refuse to give in. While disappointment is a part of life, we can either spin in or out, and as long as we grasp onto the sense of purpose beneath the challenges, those are indeed our own Little Victories.

Opening for Leeroy Stagger & The Wildflowers will be Surrey songwriter Zaac Pick, who won the inaugural Shore FM Summer Songsearch contest last year for his excellent song "My Century".

Shore 104.3 FM will be there to record and help produce the show - demonstrating once again their firm commitment to helping young Canadian performers to make their way onto the world's stages and radios.