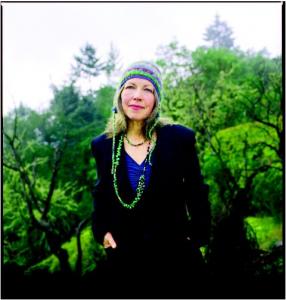 With her sophisticated jazzy folk-pop musical signature and her earthy, unadorned vocal style, Mae Moore scored nine top-forty hits, two Juno nominations and two SOCAN awards thanks to a string of high profile releases for Sony Music in the 90s. She also co-wrote a massive movie single in the form of "Heaven in Your Eyes" from the Top Gun soundtrack. At the same time, the Algonquin-trained artist quietly launched a career as a landscape painter, racked up a loyal posse of patrons, and took up organic farming on a heritage orchard in British Columbia's Gulf Islands.

Now Canadian roots music's original earth mother is returning to her solo recording career after a ten year absence with a project that marries her many facets like never before.

Her new album, Folklore, is both a compelling work of Canadiana and a mature exploration of inner and outer landscapes, featuring Mae's own artwork in the album package and released in conjunction with a companion coffee table book containing 19 of her paintings and a download code for the music. Mae will launch it with a cross-Canada tour by Via Rail train -- since the devoted environmentalist does her best to avoid flying.

Produced by Victoria's Joby Baker, the man behind the Cowboy Junkies' Renmin Park and Alex Cuba's Latin Grammy-winning self-titled album, Folklore is the work of a seasoned artist embracing life in all its emotional complexity.

The opener, "Tom Thomson's Mandolin," is an ode to the 20th century Canadian painter who was known to dabble in music on the side. The title track speaks to one's responsibility for overcoming fear and taking charge of one's destiny. "When Love is Shattered" is a lament for a lost long-time friendship, while "Winter Song" is a heartbreaking piece about watching a loved-one go through loss.

"Oh Canada," meanwhile, is Mae's unique tribute to the country she has lived nearly all over, and "My One and Only One" is an homage to Mae's husband and sometimes musical collaborator, Lester Quitzau.

Tender trumpet lines from Daniel Lapp, tasteful electric guitar licks from Marc Atkinson and jazzy piano and strings from Baker all give warmth to the arrangements.

In the years that have followed her major label chart successes, Mae has released a self-titled recording on Jann Arden's Big Hip label and recorded a collection of new songs and new versions of old songs for the American imprint, Paras. In 2004, she released the WCMA-nominated Oh My!, a duo project with Quitzau.

Meanwhile, Mae held her first solo art exhibit in 2007 at the Tumbleweed Gallery in Penticton, BC, and she has continued to hold annual exhibits at the Red Tree Gallery on Pender Island. The foreword to Folklore's companion art book was written by k.d. lang collaborator Ben Mink, a long-time fan of Mae's paintings.

Mae will be accompanied by Daniel Lapp on fiddle and trumpet, Marc Atkinson on guitars, Rick May on bass, and Joby Baker on drums. Watch for news of a CBC recording of this concert.