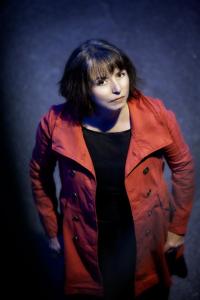 Having reviewed albums for some three decades, in any one year only a handful of albums truly deserve the maximum accolade of five stars. If everything were fair in this flawed human existance, FALL FOR BEAUTY would (at least) be a six. - Maverick Magazine, UK

There is something to be said for experience, for taking the time to grow into your own skin. All sturdy things need time to root firmly into the ground to find their strength. Lynn Miles is one of Canada's most accomplished singer/songwriters. With seven albums to her credit, the winner of multiple Canadian Folk Music Awards, and a 2003 Juno Award for Roots & Traditional Solo Album of the Year, she has certainly found her strength over time.

Through a career that has seen her move from Ottawa to Los Angeles and back again, with stops in Nashville and Austin, she has always written music with unbridled feeling and vulnerability. Miles has consistently been unflinching in putting herself out there. Now with her eighth studio offering Fall For Beauty the voice of her experience has truly elevated her songwriting to its richest depth of emotion. In 2011, Fall For Beauty was voted Penguin Eggs' Album of the Year!