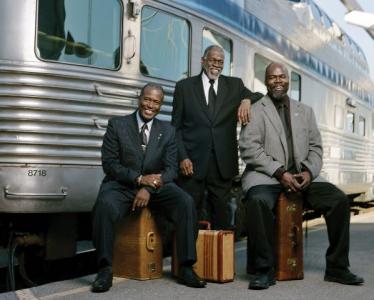 After touring their self titled sophomore album around Europe for two weeks in March as well as a myriad of performances during the 2010 Winter Olympics, The Sojourners will now officially release their critically acclaimed new album in their hometown. The three piece gospel trio will be joined on stage by Steve Dawson, Keith Lowe, Geoff Hicks and Bob Murphy. After what promises to be a very special show, The Sojourners will hit the road to play several summer festivals and then prepare for a Canadian fall tour and a return to Europe in October.

'Real' gospel that is liberally spiced with blues, doo-wop, soul and R&B with just a dash of country for good measure – a fervent blend of styles that will delight lovers of all of the aforementioned genres. One of the tracks on this set is entitled "It's Hard To Stumble (When You're On Your Knees)" – well the Sojourners don't stumble once on this wonderful set and, I can only say that I am on my knees praising it. — Blues In Britain

The Sojourners' self-titled second album is both soulful and uplifting. From the upbeat opener "Nobody's Going to Turn Me Around," to the dirty-sounding riffs in "Great Day," to the slow funeral procession-esque "Death Don't Have No Mercy," these three Vancouver-based soul singers don't miss a beat. Containing a wide array of themes such as war, death, loss, and redemption, this album has no trouble fitting in at either a church or a smoke-filled bar. — Gateway

The links between gospel music and the Blues are many, yet plenty of Blues lovers tend to overlook them. They should take a listen to The Sojourners. It is a joyous, yet often thoughtful approach. — Blues Matters

Joy is seldom something that can be purchased but this second release from Vancouver's Sojourners comes close. The combined talents of Ron Small, Will Sanders and Marcus Mosely have the soulful firepower to bring mere mortals to their kneeshaving witnessed them livebut they've succeeded in bringing their distinctive brightness and light to this 11-track gospel love-in, deftly guided by producer and player extraordinaire Steve Dawson. Going to church was never more rewarding. — Penguin Eggs

Their work together as an ensemble pays off on a second album that's even more impressive. The Sojourners' solo vocal turns and group harmonies are first-rate, and there's nice musical variety. Dawson's guitar work is typically fluent, the B3 and Wurlitzer accompaniment of Mike Kalanj is equally effective, and Jesse Zubot's mandolin adds a country tinge to "By And By." This is sweet and soulful stuff, indeed. — Exclaim

This time our boys have recorded a slide-guitar-soaked 11-track Hammond B-3 organ-driven throwback to the old-time jubilation-style gospel vocals of the Blind Boys Of Alabama. By God, this is a great album. — Xpress/Hour

The Lord moves in mysterious ways - by Doug Heselgrave

When Canadian blues icon Jim Byrnes called Vancouver based gospel singer Marcus Mosely on the phone a few years ago to ask if he could round up a few friends to record some back up vocals for a new album, no one could have guessed what would happen next. From the moment Mosely and his pals, Will Sanders and Ron Small stepped up to the microphone and began singing, they realized that they had something very special going on. When Byrnes dubbed the trio The Sojourners the name stuck and - as they say - the rest is history.

While it wouldn't exactly be right to call The Sojourners a new act - given that each member of the group has been in the music business for around fifty years - the sound, energy and commitment they conjure any time they get together would be the envy of singers half their ages.

Hot on the tail of their session with Byrnes, the Sojourners went into the studio with roots music whiz Steve Dawson to record Hold On, their first solo album, in 2007. Two years and many sessions later, Mosely, Small and Sanders have taken all they've learned in between and returned to record a second CD simply entitled The Sojourners. No longer the new kids on the block, the trio had definite ideas of how they wanted their follow up record to sound, and one listen through the songs they've captured here shows that they've succeeded beyond their wildest expectations. Working again with Dawson as producer, The Sojourners have recreated a classic gospel sound this time around - replete with the warm tones of Mike Kalanj's Hammond B3 organ and Dawson's dirty blues guitar. With Geoff Hicks and Keith Lowe returning on drums and bass, and a soaring cameo from Jesse Zubot on 'By and By', The Sojourners have found a band that keeps pace with the power of their vocals.

This is not music that strives to be polite. In The Sojourners' universe, echoes of doo wop, R&B, country and blues weave together to create a unique sound that has all but vanished from today's world.

This is gospel music that can take a punch and remain standing. Singing praise music with their own special 'stank', the Vancouver based Sojourners sound just as at home in a road house bar as they do in a revival tent. Never has travelling the hard road between sin, loss and redemption sounded as glorious as it does on these eleven timeless recordings. Listening to these seasoned vocalists breathe new life into classic tunes like Doris Akers' Lead Me Guide Me and The Violinaires' Another Soldier Gone is as transcendent an introduction to gospel as anyone could ever hope for. Other highlights include a chilling reading of Rev. Gary Davis' Death Don't Have No Mercy - a song long associated with the Grateful Dead . In this version, The Sojourners are at full strength as Ron's haunting leads set a dark tone that is offset by sweet harmonies from Will and Marcus. To hear all three singers' distinct vocals meet at the crossroads in this song is to experience the signature Sojourners sound as different gospel traditions come together and blend mellifluously as one. An uplifting cover of Los Lobos' Peace in the Neighbourhood serves to remind listeners of the connection between civil rights, social justice and gospel that Mosely, Small and Sanders have explored throughout their careers.