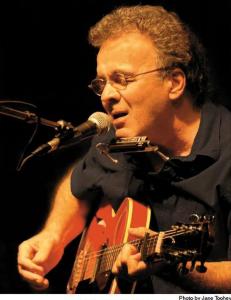 Many of those familiar with Red House recording artist Ray Bonneville know that he is a hard driving, blues influenced, song and groove man who often writes about people who live on the fringe of society. Ray's vibe is loose and soulful. With a greasy guitar style, horn-like harmonica phrasing, smoky vocal style and pulsing foot percussion he immediately rivets audiences. His solo performance fills a concert hall with all the sound layering and drama of a full band. The consummate, driven professional, Ray plays more that one hundred and fifty shows a year across the US, Canada and Europe. He has a loyal, enthusiastic fan base wherever he goes.

In 1999 he won the Juno award (Canada's Grammy) and was nominated twice more after that. His song about the resilience of New Orleans, "I am the Big Easy" was the most played song by North American folk DJs, and won "Song of the Year" at Folk Alliance in Memphis in 2009, the same city where he took first place in the International Blues Challenge in 2012. About that award he says I just went to Memphis to meet some new folks, so it took me by surprise when they announced my name; I see what I do as the offspring of traditional blues music.

He was forty-one when he started writing songs and making records after playing all over for twenty years. When asked why it took so long, he replied it's hard to say, but I only spoke French until I was twelve years old when my family suddenly moved us from Quebec to the Boston area, so maybe it took me that long to really feel the nuance of the English language.