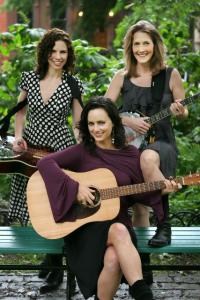 If one word describes the new Red Molly CD, Light in the Sky, that word is joyous. Once again, with the tick-tight arrangements, crystalline vocals and caramel harmonies that the Boston Globe praised, Red Molly creates an album with gorgeous a cappella ballads, bluegrass-tinged folk and a touch of jazzy western swing, all done up in Red Molly's trademark three-part harmonies, signature dobro licks and inventive arrangements. The title sets the theme for the 14 tracks: optimism, joy, and excitement for the future.

Red Molly knows about optimism and joy. The band's fans, referred to as "RedHeads", have always responded to the sense that the band is a group of friends, sharing songs in their living room. That's exactly how it felt in 2004 when the original members of the band, Laurie and Abbie sat around a campfire at the Falcon Ridge Folk Festival, singing and talking about their favorite songwriters. Knowing they had stumbled into something extraordinary, they formed Red Molly and spent the next seven years on the road. Red Molly is Laurie MacAllister (guitar, banjo, bass), Abbie Gardner (dobro, guitar) and the newest member Molly Venter.

Since its release in October 2011, Light in the Sky has climbed up the Americana charts and is now at number 10!