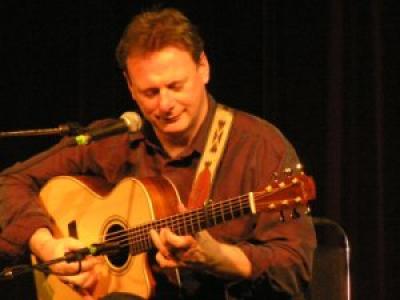 TO FIND A VOICE on so ubiquitous an instrument as the acoustic guitar is quite an achievement: to do so within a centuries old idiom where the instrument has no real history is truly remarkable. Scots born and now Canada based, Tony McManus has come to be recognized throughout the world as the leading guitarist in Celtic Music. From early childhood his twin obsessions of traditional music and acoustic guitar have worked together to produce a startlingly original approach to this ancient art.

Through Tony's hands the emotions of celtic music are transferred to the guitar and the listener is drawn into the driving energy of a reel or the timeless atmosphere of a lament - each finding an authentic voice through his interpretation.That emotional connection lifts McManus's playing beyond mere virtuosity to a place where new listeners worldwide - from the Hebrides to Connemara and from Bogota to Tokyo are won over to this music.

In addition to his four solo albums there have been groundbreaking recordings with musicians as diverse as Scots fiddler Alasdair Fraser, bluegrass legend Dan Crary and French bassist Alain Genty among many other collaborations.

Whatever the context, Tony's presence is unique and driven by a passion for the music. His engaging personality on stage has taken him to five continents and his contribution was recently recognised with a Gold Medal voted by the readers of Acoustic Guitar magazine - fellow recipients were John Williams, Paco de Lucia and Tommy Emmanuel.

Tony's latest recording "The Makers Mark" - released by Compass Records featuring solos on a roomful of the finest instruments currently being made has won universal acclaim even in the rock guitar press where jigs and reels would have been unheard of prior to its release. On this album, alongside his lifelong love of Scottish and Irish music, he explores harmonies from South Africa. the strange scales and rhythms of Eastern Europe and an achingly beautiful baroque madrigal from Claudio Monteverdi.

Whatever the source, the listener is engaged by a creative integrity and by one of the most original musicians to emerge in recent years.